Second in the Boston Marathon, fourth in the London Marathon, Ernst van Dyk’s back in South Africa to regroup for his next challenge… and a switch of codes.
The six-time Paralympian (and it should be a seventh in Rio later this year!) took strain in London, despite his close-run fourth position.
But it wasn’t all Van Dyk’s fault, more the vagaries of the British weather on race day.
‘I’d fully recovered after I’d suffered a trapezius muscle strain after that hectic sprint in Boston and was looking forward to being very competitive in London. ‘However because the UK is an island we were keeping a very close eye on the weather. It was supposed to rain until 7am or but should have cleared by our 8.55 start.’
But by 8am the rain still hadn’t cleared entirely and the ever-competitive Van Dyk had to make a call.
‘I decided on full wet-weather wheels and pushrims. But then during the closing stage of warm-up it cleared and suddenly we had a dry race on the cards. I was so angry at myself for making the wrong call,’ he tells Road to Rio 2016. ‘The wet weather pushrims are great for the wet but around 10% of the grip gets lost in the dry.’
End result was that Van Dyk, already one of the heavier athletes in the field, would battle with acceleration as well as not climbing to his full potential.
‘It was wet when we started and Dave [Weir], Marcel [Hug], Kurt [Fearnley] and myself established an early lead. By around 5km five others had bridged the gap to us.’
By now the rain had come and gone and the road surface was all but dry and this time was a classic case of the gloves really coming off.
‘I was battling. Each time there was a surge or a climb I would lose contact with the group and have to work extra hard to get back to them. By around 12km the rough wet-weather pushrim had eaten through the rubber on my one glove making things even harder as I now had lost around 30-40% of my ability to apply power on my left side.
‘I continuously got dropped but was able to roll roll back to them on the slight downhills. The race had turned very tactical as it was clear that we had the top three dogs (Marcel, Dave and Kurt) setting themselves up for a sprint finish. To me it was very clear that Marcel was very strong and that it would take a lot to beat him. ‘He was controlling the race from the front which takes a lot of confidence to do. With 2km to go James Senbeta from the US who was a little behind was able to bridge the gap and went straight over to attacking. I lost a bit of ground but with 600m to go I had pushed myself back to the front five.
‘In the final 150m I was able to pass Senbeta to claim fourth place. It was a long hard day for me and I once again realised how big a role the weather can play in our races. After round two of eight I am currently sitting in third of the Abbot Majors. Our best five results will make up the final score so I hope that I will be abel to score better positions in the remaining six events to keep me in contention for the overall prize.
‘It’s now in SASPD and SASCOC’s hands to make the final decision on whether I get to start the marathon in Rio.
‘After that I have Berlin, Chicago, and NY left in 2017 to score points for the current series.’
For now though Van Dyk can put the wheelchair away and get on to his bike as next stop is the World Cup in Pietermaritzburg in just under two weeks. 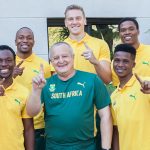 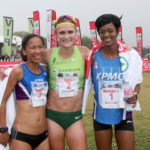