This weekend’s aQuelle Midmar Mile will be celebrating the 44th year in fine style as 2016 Olympic open water gold medallist Ferry Weertman is out from the Netherlands, intent on tackling seven-time men’s winner Chad Ho in the world’s largest open water swimming event at Midmar Dam.

Weertman won the final dash during the Olympic Games 10km open water event, while Ho ended 10th only five seconds off the pace. A rematch here for Ho, if he takes his eighth Midmar Mile title in a row, will truly place him among the best in the world.

The Olympic champion headed to open water swimming after he failed to qualify for the 800m freestyle at the 2009 European Junior Championships. The most influential person in his career has been coach Marcel Wouda, while his hero and idol remains Dutch swimmer Maarten van der Weijden who raced in the Mile swim in 2005 to finish second to Troyden Prinsloo.

‘Pain is not my enemy, it’s my call to greatness’ is the motto used by Weertman to achieve the results he has notched up, culminating with that gold in Rio last year.

While one can expect a tough race between Ho and Weertman, USA’s world champion Chip Peterson will add ample competition. The North Carolina based swimmer won gold at the 2005 World Championships in the 10km and finished second in the 5km. Then in 2007, Peterson won the gold in the 1500m freestyle at the Pan American Games in Rio as well as taking the silver in the 10km open water event.

Throw the younger Mathew Meyer (also a Rio Olympian) into the fold who in 2016 led the Midmar Mile past the 1200m mark before Ho took over. Meyer then went on to qualify and compete at the Olympic Games – all in his matric year – and this must rate as one of the most competitive men’s events yet!

Midmar also welcomes back double winner Ashley Twichell among the women. She has been in outstanding form lately. Recently married to Derek Wall, who will accompany her, having a training partner like Peterson seems to count in her favour.

Twichell finished second to British star Keri-Anne Payne in 2012 before dominating with 2 victories in a row in 2013 and 2014 at Midmar. In 2015 a fired-up Payne took her title back with a solid 30 seconds victory.

But Twichell’s speed over the 800m freestyle in the pool, earning her a silver medal at the recent World Short Course Championships and then again claiming a victory at the Arena Pro-series earlier in January, proves she is the swimmer to beat.

Lexie Kelly, who came out in 2014 and swam all eight miles, finishing in ninth position in the main women’s race, will be up against Peterson and Twichell. They will add to their experiences when they fly down to Cape Town the following week to compete in the Sanlam Cape Mile before heading back to their home bases in the USA.

Top British coach Sean Kelly visits every year and enters his swimmers in the challenge once again. Holly Hibbott was second to Michelle Weber last year, but has since moved up the ranks to finish the season with a top-10 800m freestyle in the world and becoming the senior double national for the first time.

Harrison Coulter, Katie Matts and Lucy McKenzie could also feature from the Kelly brigade – and don’t be surprised if Kelly himself decides to tackle the 51-60 years age group this year.

The aQuelle Midmar Mile prides itself on approximately R2million raised for charities through the efforts of some 120 brave swimmers tackling all eight miles over the two days, as well as 12 swimmers tackling the 16-mile journey by swimming to the start of each of the races. 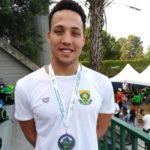 SA team take medals tally up to 15 in Algeria

Tokyo looms, again, We don’t know for sure in what shape of form the Olympics and Paralympics will take place in July to September and if anything 2020 taught us to take nothing for granted. What we do know is that if Tokyo 2020 +1 does go ahead, it will do so against a new-found back drop where simply taking… END_OF_DOCUMENT_TOKEN_TO_BE_REPLACED