Our men’s hockey side’s last-chance Olympic Games expectations now rest in the east a few months down the road.

This after the men put together a top-class first-half to lead India 2-1 in the semi-finals of the Champions Challenge at Randburg Hockey Stadium on Saturday but just about everything went awry in the second period as the eight-time Olympic gold medallists came back to win 4-2.

The Africa champions had to win to satisfy the extra criteria put to them by SASCOC that they needed to reach Sunday’s final to earn a place at the London 2012 Olympics.

The upshot is that the SA team hand their Africa continent place for London 2012 to the highest-ranked country that did not qualify in their respective continental tournament, fourth-ranked Spain, who in turn give the men in green and gold their berth in the final Olympic Qualifier in Japan in April/May.

SA must now win the Japan tournament to get to the London Olympics, but first there is the bronze medal match against Argentina Sunday before India face Belgium in the 4.30 pm title match.

Earlier, Belgium beat the South Americans 3-2 in a penalty shootout after the scores were locked 2-2 following golden goal extra-time.
SA started very well, putting the Indians under pressure, initiating an attack that saw captain Austin Smith scything through from central midfield, laying off to Taine Paton and Marvin Harper helping the initial shot over the line to a massive roar from the crowd (1-0).

But in the 14th minute V.R. Raghunath equalised from the match’s first penalty corner (1-1), while SA fell into the trap of trying to pass through defenders and not around them.

Clint Panther got in a shot at the other end and then Marvin Harper fired an accurate pass into the strike zone that was finished off in stunning fashion by Thornton McDade (2-1).

With 13 minutes to half-time it was anyone’s game and a repeat of the 11-goal Pool A stunner won by India was in the offing, while SA were just 48 minutes away from the London 2012 Olympics.

Then SA were desperately unlucky not to win a PC but soon after Panther offloaded a shot of rare class and then McDade appeared a dead cert to have won a penalty stroke but Australian umpire Tim Pullman was having nothing of it.

Several crucial decisions were going against the SA attackers but the SA defence refused to get rattled and Lloyd Madsen in particular defused some edgy moments in the face of the skilful, pacy Indian forwards.

However, an unforced turnover five minutes after the changeover gave India the opening and Saravanjit Singh drew the scores level despite keeper Brendon Botes’s initial double save (2-2).

With 27 left, SA suffered a massive blow when leading tournament goalscorer Justin Reid-Ross was forced to leave the field and soon after India won their second PC which was flashed into the net by the imperious Sandeep Singh (3-2).

SA striker Lloyd Norris-Jones broke through soon after but his shot cannoned into the keeper’s pads. Matters went even worse when Pullman penalised SA for what he deemed was a body-check and Sandeep Singh nailed his second (4-2).

SA tried desperately to pull the two goals back but mistakes crept in and the 50-50 decisions continued to go against them and they were unable to use their greatest scoring strength; not winning even one PC until five minutes from the end as Pullman and England colleague
Andrew Kennedy’s decisions remained inconsistent, although at least they did send two errant Indians to the sin-bin.

With five left, SA’s first PC saw Reid-Ross’s monster drag-flick induce a superlative stick save from captain and keeper Bharat Chetri but precious minutes dribbled away from the desperately disappointed South Africans in what was nevertheless a very brave performance.

One must never discount the fine skills that India showed in patches and they scored when it really mattered. 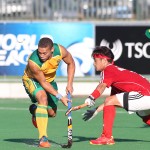 SA men go down to China in semi-final

Tokyo looms, again, We don’t know for sure in what shape of form the Olympics and Paralympics will take place in July to September and if anything 2020 taught us to take nothing for granted. What we do know is that if Tokyo 2020 +1 does go ahead, it will do so against a new-found back drop where simply taking… END_OF_DOCUMENT_TOKEN_TO_BE_REPLACED