Big-time basketball comes to South Africa later this year when the American NBA stages a star-studded exhibition game.
Johannesburg will be the venue for the 1 August fixture after the NBA and National Basketball Players Association announced details for its first exhibition in Africa.
South Sudan born Luol Deng of the Miami Heat will lead Team Africa against a Team World, captained by Los Angeles Clippers star Chris Paul.
Venue for the game will be the Ellis Park Arena.
According to an AP report, basketball is more popular in West Africa than southern Africa, but South Africa’s main cable TV network shows live NBA games, and the NBA has visited the country regularly recently to hold training camps and charity events. The NBA opened an office in South Africa in 2010.
The NBA said it’ll also bring over coaches for the game, including coach of the year Mike Budenholzer of Atlanta. 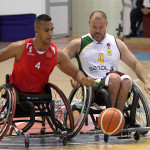 Amawheelaboys miss out on Rio after semi-final loss in Algeria

By GARY LEMKE in Tokyo On the third day of staying in the Paralympic village bubble “it” finally dawned on me. “It” wasn’t the sheer visual aspect of the 4 000-plus Paralympians with disabilities all in the same environment of towering 17-storey apartments and surrounded by a 4km perimeter fence. Admittedly, that is the initial and most common conclusion of… END_OF_DOCUMENT_TOKEN_TO_BE_REPLACED