The national junior judo team picked up a surprise total of 17 medals at the Zone VI Games.

Judo is proving to be the growing Olympic code in South African sport as they excelled at the U20 tournament. They contributed 17 medals to South Africa’s current overall tally of 74. This included nine gold triumphs.

This is a huge improvement from South Africa’s run at the 2011 Junior World Championship (which was held in Cape Town ÔÇô the first African city to host the event) where none of the fighters qualified for a final or achieved a podium finish.

‘We reached our goal and everyone is proud. We can all go home smiling,’ Clemence told RoadtoRio.co.za. ‘Judo is growing quickly in South Africa. We have unearthed great talent in the junior ranks and they will only get better with experience.

‘The juniors we have at the moment are much better than the athletes that featured at last year’s Junior World Championship, that’s why there is more success. This is because of all the national and international experience our youngsters are getting.’

‘Every fighter deserves special praise for their efforts,’ added Clemence. ‘Dale and Sharon did very well in the open fights because those events were late additions to the schedule. There is promising talent that featured at the Zone VI Games ÔÇô talent we can all be excited about.’ 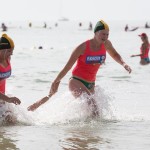 Pillay on SA in Qatar

SA hockey men in play-off after loss to Japan