Jessica Brown and Courtney Smith (pictured above) set out to break their own personal best time, and came back with a new national record in the Junior Women’s Team Sprint with a time of 39.97 seconds. ‘We really went out there today to break the time that we set at the African Continental Champs, and to have fun of course,’ said Smith.

‘Yes, of course we were looking at the record, but our major focus was on preparing ourselves for breaking our own personal best. We felt very comfortable. We are both over the moon and really happy that we clocked the time today,’ added Brown.

Earlier in the morning, it was the Under-17 Girls Team Pursuit that saw Imaan Phillips, Mischka Strydom and Kelsey van Schoor clock a time of three minutes 4.81 seconds to secure the national record for their category.

The Elite Men’s 1500m was won by defending Champ Bernard Esterhuizen, with Jean Smith and Wade Theunissen rounding out the podium. Esterhuizen said: ‘So far these champs have been up and down for me. I had a great Team Pursuit and the legs felt good. I did crash three weeks ago at the Cape Town Cycle Tour, so I’ve had a bit of a bad month of training.

‘This last race was very good for me. I think I have the legs to sprint, but my endurance isn’t up where it should be. Next year it will be much better for the longer races.’

In his interview, Esterhuizen was anticipating the 15km Scratch race, with another gold medal top of mind, but it was track cycling ace Nolan Hoffman who crossed the line first in an exhilarating finish. Esterhuizen and Calvin Beneke gave Hoffman a run for his money, but Hoffman had the legs in the end to finish it off and secure the gold medal position.

Jean Spies put in a solid performance throughout the Scratch race. Esterhuizen and Graeme Ockhuis settled for silver and bronze medals respectively.

In the Junior Men’s races, Jason Oosthuizen continued his winning spree when he cleaned up in the 1000m Time Trial, 1500m and 7.5km Scratch Race, with teammate and friend Rickardo Broxham hot on his heels.

A name not going unnoticed is under-17 rider Matthew Fortuin, pictured above, who has been focusing hard on road and track events. ‘They complement each other,’ he said. ‘What you do on the track, you’re always working hard to do on the road.’

Fortuin mentioned how nervous he was coming into these Champs. ‘I don’t know all of the competition and in an event like this, everyone is considered competition. Everyone is strong and everyone has trained hard to be here.’

He claimed the first position in his Individual Pursuit race and said it was a bonus because he didn’t know his times against the other riders. ‘I just rode it to my best ability,’ he said.

The championships wrap up on Saturday.

All pictures courtesy of DoubleST 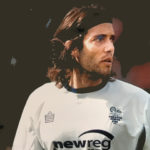 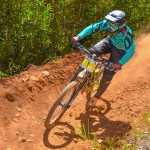 Potgieter and Olivier are Downhill champs in Helderberg

Tokyo looms, again, We don’t know for sure in what shape of form the Olympics and Paralympics will take place in July to September and if anything 2020 taught us to take nothing for granted. What we do know is that if Tokyo 2020 +1 does go ahead, it will do so against a new-found back drop where simply taking… END_OF_DOCUMENT_TOKEN_TO_BE_REPLACED