Mark Keeling ended the second ICF Ocean Racing World Championships in Tahiti on a high note by snatching the junior boys world crown on a day that saw Team South Africa add a further silver and bronze medal to their haul.
The Fish Hoek youngster comfortably dispatched the challenges from Frenchman Hector Henot and Fergus Morgan of Australia to claim the top step on the junior men’s podium, a day after Durbanite Jenna Ward won the women’s Under-23 world title.
In the senior men’s race, the race for the title held by Capetonian Shaun Rice going into this event was decided between two Australians, with the impressive Cory Hill prevailing over the veteran Clint Robinson.
Jasper Mocké (Epic Kayaks) bagged another medal for Team SA by finishing third, just ahead of Rice (Think Kayaks) in fourth, with marathon world champ Hank McGregor (Jeep Team/Epic Kayaks) a minute further back in sixth, and Barry Lewin (Jeep Team) finishing in the top 10 as well.
Kenny Rice added a silver medal in the Under-23 men’s race, finishing a minute and a half behind Australia’s Mackenzie Hynard.
Ward’s win rounded off an excellent showing by the Team South Africa surfski women, filling three positions in the top 12 overall, and two of the top four Under 23s.
Ward (Jeep Team) was a factor in the overall women’s race throughout, raced in excellent downwind conditions, and eventually won by New Zealander Teneale Hatton, with Ward narrowly missing a senior medal and the third place on the podium to another Kiwi Rachel Clarke. An elated Ward, who is a double bronze medallist at the world marathon champions, said that her Under 23 race had been secondary to her overall challenge. ‘I wanted to race the senior girls from the start,’ she said. ‘That is what kept me going, and to get the U23 title is just an added bonus.’
Fellow Durban MacSquad training partner Hayley Arthur was seventh overall and the fifth senior women, with Daynie Loots also racing into the seniors top 10.
Durban schoolgirl Kyete Purchase’s fourth in the U23 race, who also placed her as the first junior, is even more remarkable, as she is recovering from an emergency appendectomy after bursting an appendix at the world marathon championships in Hungary two weeks ago. 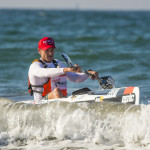 McGregor wraps up yet another ocean racing title in Mauritius 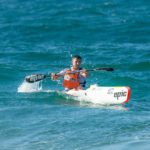 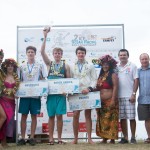 Keeling and Ward win surfski gold for SA in Tahiti