Raven Klaasen’s great early run of early-season form has come to a grinding halt at the Australian Open in Melbourne, writes Mark Etheridge.
After reaching the final of the Chennai Open in India and winning the doubles title at the Heineken Open in New Zealand, Klaasen and India’s Leander Paes were knocked out in the second round on Friday.
They went down to Italians Simone Bolelli and Fabio Fognini in a three-set affair.
Final score was 6-2 4-6 1-6 in a match that lasted an hour and 37 minutes.
Klaasen and Paes had more aces (5-2) than their opponents and they had two double-faults compared to the Italians’ five.
The SA/Indian combination had a first-service percentage of 64% compared to the 70% of their opponents and when it came to points won on their first serve the readings were 69-80% in favour of the Italians.
Klaasen is still not done in Melbourne though as he is in mixed doubles action with the Ukraine’s Elina Svitolina. They play the Netherlands’ Michaella Krajicek and Romania’s Florin Mergea, the latter is a player that Klaasen came across en route to victory in his New Zealand triumph.
Meanwhile two of the country’s rising talents in the shape of Lloyd Harris and Katie Poluta will do battle in the Australian Open Junior Championships.
Harris was a part of Team SA that did duty at the Youth Olympic Games in Nanjing, China in August last year while Poluta captured the girls’ singles title at the African Union Region 5 Games in Bulawayo, Zimbabwe last month.
Harris takes on fourth seed Yunseong Chung of Korea while Poluta takes on India’s Pranjala Yadlapalli in first round action. 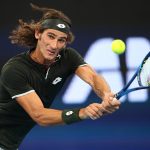 Harris through, Anderson out in Melbourne 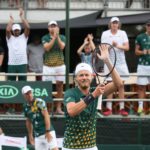 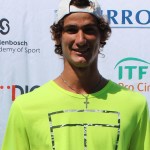 Harris makes it four Futures wins on the trot

Tokyo looms, again, We don’t know for sure in what shape of form the Olympics and Paralympics will take place in July to September and if anything 2020 taught us to take nothing for granted. What we do know is that if Tokyo 2020 +1 does go ahead, it will do so against a new-found back drop where simply taking… END_OF_DOCUMENT_TOKEN_TO_BE_REPLACED