Chad le Clos is going to walk off with four Commonwealth Games gold medals, while Team South Africa will win 11 swimming medals – including five golds and five silvers – if the bookies are to be believed, writes Gary Lemke.

Having arrived at the London 2012 Olympics as a 33-1 outsider to dethrone Michael Phelps in the men’s 200m butterfly, Le Clos is now a short-priced favourite to clean up in four different events, the 100 and 200m butterfly and the 100 and 200m individual medley. It would be a remarkable return for the gifted South African. So short is he in the betting, that if you put R20 on him to win the 100m butterfly, you’ only get R21 in return. In the 200m he is even shorter priced, at 1/66, which means a R1 profit for every R66 wagered!

Inspirational veteran Roland Schoeman has been installed as 8/10 favourite to take the 50m butterfly gold, and he’s also fancied to win silver in the 50m freestyle.

In terms of South Africa’s first medal at the Games, the bookies are saying that triathlete Richard Murray will win the bronze medal on Thursday.

Apart from online betting, there are a host of betting shops up and down the streets of Glasgow. I popped into Corals, and found the following odds:

Australia are 1/3 favourites to win gold, followed by England at 11/4 and New Zealand at 13/2. South Africa are fifth favourites at 33/1 to capture gold.

Australia are 1/2 favourites to claim the gold medal, followed by New Zealand at 9/4, with England at 13/2. South Africa are fourth favourites at 12/1.

South Africa are sixth favourites at 33/1, with Australia at 4/7 to take gold.

Men’s 50m freestyle: Roland Schoeman is second favourite at 3/1 to take gold, with the bookies believing he’ll win the silver. George Bovell is the favourite at 15/8, with James Magnussen third favourite at 4/1.

Men’s 400m freestyle: Myles Brown is at 40/1 to win the gold, seventh favourite. The gold medal favourite is David McKeon at 10/11.

Men’s 50m butterfly: Schoeman is the 8/10 favourite to win gold, with Le Clos fourth favourite at 9/1. 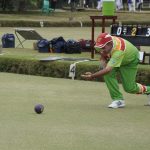 SA bowlers now know what they’re up against in Glasgow