Western Province’s Luan Grobbelaar (11) once again showed his spectacular form, winning the 50-metre freestyle, 200m breaststroke, 200m backstroke and 50m butterfly, bringing his tally to 11 gold medals at the end of the competition.

At Kimberley’s Karin Muir Swimming Pool, the rising star of the competition was KZN’s 10-year-old Zoe Frank who, after breaking numerous age group records at the event, concluded with three more gold medals in the 50m freestyle, 200m backstroke and the 50m butterfly.

In the multi-disability events, Nkosi Dludlu (14), Sibanda Mduduzi (15), Caitlin Ogden (13), Cornell Loubser (18) were victorious in the 50m freestyle, while Mduduzi added the 100m breaststroke and 50m butterfly alongside Thulane Mabuza.

The next event Swimming South Africa will be hosting is the SA Level 1 Regional Age Group Championships, which are to be held in Pretoria, Newcastle and Oudtshoorn from 5-7 April. 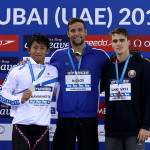 Roland out but Ferns in

Tokyo looms, again, We don’t know for sure in what shape of form the Olympics and Paralympics will take place in July to September and if anything 2020 taught us to take nothing for granted. What we do know is that if Tokyo 2020 +1 does go ahead, it will do so against a new-found back drop where simply taking… END_OF_DOCUMENT_TOKEN_TO_BE_REPLACED