Our Simon Magakwe’s hunt for that elusive international A-standard qualifying time in his bid for inclusion on Team South Africa for the Olympics in London later this year continues.

This after a third recent match-up with sprint legend Usain Bolt in the 100-metre dash in the Diamond League meeting in Oslo, Norway on Thursday night.

On Thursday, Bolt blitzed to victory in 9.79sec and Magakwe took fifth out of seven runners in 10.30sec.

Magakwe has bettered the A qualifying standard of 10.18 on six occasions locally. He needs but one more of those performances to surely book his place in London.

After false starting against Bolt in Ostrava, Czech Republic, Magakwe ran to a 10.33 finish in Rome last week.
And he must have been startled by Mark Lewis-Francis on Thursday night, the Britain being red-carded in lane two alongside him.

But the national sprint champion and joint SA recordholder (10.06) looked more confident than at his previous two victories and must be hoping he can carry over his SA form to Europe before the cut-off date of qualifying.

Earlier in the evening SA champion Cornel Fredericks flew to fifth place in the 400m hurdles.

While the world’s fastest hurdler last year, our own LJ van Zyl, is back in South Africa receiving treatment for injury, Fredericks ran 49.16 to end behind the in-form Javier Culson of Puerto Rico on Thursday. Culson clocked 47.92 ÔÇô the world’s quickest this year and┬á 0.10sec off the meeting record. Fredericks is already part of Team SA 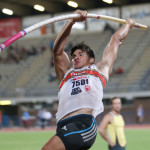