Moodie won the doubles title in 2005 as he was partnered with Australian Stephen Huss.

Now working in Durban, Moodie took time out from a busy work schedule to watch the doubles final where Klaasen and American partner Eric Butorac (pictured right) lost to Sweden’s Robert Linstedt and Lukasz Kubot of Poland, in straight sets 6-3 6-3.

“I thought Linstedt and Kubot executed well from the the start, particularly on serve and return,” Moodie told Road to Rio 2016. “They played a high level of tennis throughout and put pressure on Raven and Eric.

“I felt Raven and Eric weren’t able to raise their game and gave their opponents a chance to play well in parts of the match. But I also think Linstedt and Kubot played exceptionally well so Raven and Eric would really have to have done something special to take control of the match.

“I’m sure its a tough loss for Raven but its a huge step forward in his career and hopefully he can build on it.”

Rik, Chanelle out of Open 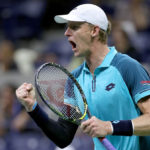 Anderson on his epic run at the US Open