Both our men’s and women’s hockey sides suffered a second defeat to their Argentine counterparts in Mar del Plata on Sunday evening, writes Jon Cook.

The South Americans went into half-time 2-1 up and┬á turned that advantage into a 4-2 final scoreline.

Argentina won the first Test 6-0 on Saturday and now lead the five-Test series 2-0. ┬áThe third Test is on Tuesday.

In only the third minute, Gonzalo Peillat went low to SA captain and goalkeeper Rassie Pieterse’s right to open the scoring from the match’s first penalty corner.

In the 29th minute SA equalised when Matt Guise-Brown sent a penalty stroke into the top-right corner, this after striker Pierre de Voux’s follow-up from South Africa’s third PC had caught an Argentine foot on the goalline.

In the 32nd minute Argentina regained their lead when Ignacio Gilardi made no mistake after a hotly disputed PS had been awarded, Pieterse adamant the decision had gone the wrong way.

Argentina enjoyed a good spell after the changeover and Peillat made no error from the South American’s fifth PC in the 47th minute.

SA had four PCs in the match to Argentina’s seven, but battled to steer powerful drag-flicks between the goalposts. Argentina, very quick on the counter-attack, stretched to 4-1 up in the 50th minute when Lucas Martinez’s fine strike rounded off a slick piece of play.

SA kept working hard though, Taylor Dart standing out in midfield, and against the run of play Jaco Fourie fired a pass into the strike zone, to which De Voux did well to get a touch and the margin was shaved to 4-2.ÔÇ¿ÔÇ¿SA left out Miguel da Graca and fellow striker Ignatuis Malgraff and brought in new cap Cuan Burton-Moore of Western Province and Eastern Province’s Geowynne Gamiet, after a long layoff.

Meanwhile in the women’s clash, it looked like eight-time World Player of the Year Luciana Aymar was running away with the show, before the Investec SA girls struck twice in stunning fashion to draw level at half-time.

But then four goals in the second half steered the South Americans to a 6-2 victory.

Aymar, captain of world No2 side Argentina ÔÇô and the reigning World Cup champions ÔÇô sliced through her favourite left channel in inimitable fashion in the ninth and 11th minutes to set up straightforward tap-ins for Carla Rebecchi and Agustina Albertario.

Trailing 2-0 inside the quarter-hour with Aymar in irresistible form, SA fought their way back with a brace of superb goals by Tanya Britz in the 16th (from captain Sulette Damons’ pass)┬áand two minutes later from Damon, with fellow striker Lilian du Plessis making the vital pass.

SA had their chances after the break but it was Argentina who turned their own chances into goals.

In the 62nd minute Daniela Sruoga followed up Argentina’s eighth PC to make the final score 6-2. SA goalkeeper Phume Mbande made a host of fine saves ÔÇô this shot stopper is growing in leaps and bounds ÔÇô while Shelley Russell, back for this Test along with Jade Mayne, must be wondering what she has to do to convince the officials that she has earned penalty corner decisions.

The result means that Argentina are 2-0 up after having won the first Test 6-1 on Saturday night.

The third Test is at 1.40am SA time on Tuesday. 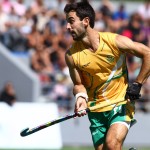 Eustice excited ahead of young hockey side’s challenge against Austria 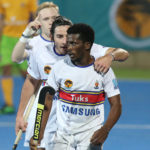 SA men look to up their game against Ireland in Argentina

Tokyo looms, again, We don’t know for sure in what shape of form the Olympics and Paralympics will take place in July to September and if anything 2020 taught us to take nothing for granted. What we do know is that if Tokyo 2020 +1 does go ahead, it will do so against a new-found back drop where simply taking… END_OF_DOCUMENT_TOKEN_TO_BE_REPLACED