Africa’s first team at the Tour de France, MTN-Qhubeka had a true baptism of fire in Monday’s third stage as three of their riders were involved in a bone-crushing pile-up with 50 kilometres to go.
Thankfully all three of Daniel Teklehaimanot, Reinardt Janse van Resnburg and Tyler Farrar were able to scrape themselves together and push on to the finish.
There was early reward for MTN-Qhubeka’s Serge Pauwels who capitalised on being the first Belgian rider past the 15km mark to earn himself a brand brew Peugeot motor vehicle – after the Tour that is. The stage was a 159.5km rider from Anvers to the hill-top finish at Huy.
The race was neutralised for some time after the crash that saw a good few riders’s TDF dreams go up in smoke, including those of yellow jersey holder Fabian Cancellaro (fractured vertebrae) and South Africa’s own Daryl Impey (fractured collarbone), riding for Orica-GreenEdge.
After the racing got under way again it was a nervous Merhawdi Kudus (Eritrea) and SA’s Louis Meintjes who were able to join the leading group and they went on to end 30th and 22nd respectively.
Said Kudus of his third stage: ‘We had massive support today from before the start with so many fans coming out to see us. There were Eritrean flags everywhere so when I started I was really motivated. Unfortunately it was a bad race. I have never seen anything like this before, everybody gets so nervous and there was a massive crash. So when I was riding in the peloton I was a little bit scared and didn’t ride right in front but actually I was feeling good. ‘
Janse van Rensburg echoed his teammate’s thoughts: ‘It was quite nervous leading up to the point of the crash as everyone was fighting for position before the first climb of the day. There was a touch of wheels up front and all I saw was guys on the floor. We were going so fast on that downhill that there wasn’t even chance to brake and about 30-40 riders went down.
‘I crashed on the grass so I’m okay. Daniel and Tyler look a bit worse than me but they still look okay to continue. Not nice when these things happen. Wish everyone who got hurt a speedy recovery.’
At 223.5km, Tuesday’s fourth stage from Seraing to Cambrai is the longest stage of the tour. If that wasn’t enough to worry about it also features a notorious section of cobbles that could make for fun and games, not to mention possible heartbreak.
MTN-Qhubeka start the stage with their highest rider in the General Classification standings being Jacques Janse van Rensburg in 36th spot, 3min 40sec down on race leader Chris Froome (Team Sky).
In the team standings they sit halfway down the table in 11th spot, 6:53 behind BMC Racing Team (21hr 35min 52sec’s riding time). 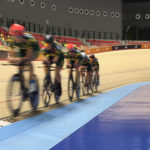 Super seven on track as they make their mark in Malaysia

By GARY LEMKE in Tokyo On the third day of staying in the Paralympic village bubble “it” finally dawned on me. “It” wasn’t the sheer visual aspect of the 4 000-plus Paralympians with disabilities all in the same environment of towering 17-storey apartments and surrounded by a 4km perimeter fence. Admittedly, that is the initial and most common conclusion of… END_OF_DOCUMENT_TOKEN_TO_BE_REPLACED