Team South Africa’s triathletes wowed at the Discovery World Cup sprint event in Cape Town on Saturday, with Richard Murray spearheading a 1-2-3 finish in the first event of the 2017 International Triathlon Union calendar.

Home boy Murray, who missed last year’s event due to a broken collar bone, broke through to finally win an ITU event in his city, despite having to serve a 10-second penalty for misplacing his bike helmet in his kit box before heading out on the run leg. He clocked 51min 33sec.

Olympic bronze medallist Henri Schoeman was just behind him in a solid run of 51:41 as he also got his season up and running.

Comeback kid Wian Sullwald will sleep soundly on Saturday night after shrugging of months of illness and injury to round off the podium in a time of 51:56 at the finish right next to the stadium which was so successfully used for last year’s event.

The women’s race saw Australia-based Anel Radford making amends for not finishing last year’s race after cracking her ribs in a previous event, and she was the first South African… in 15th spot as Great Britain’s Lucy Hall continued that nation’s winning roll at the Cape Town event.

Said Murray, who only returned from a three-week training break in Namibia on Thursday: ‘Finishing 1-2-3 is quite a statement.

‘With Wian taking third it couldn’t really have been a better day.

‘The penalty was just one of those things, there was stuff in my box and my helmet just fell out and I didn’t want Henri to get too far ahead.

‘After the swim I worked hard to catch the front pack and had to get my breath before doing my bit of work.

‘As for the penalty, I thought it was 15sec but then it turned out to be 10sec so I knew that would just be enough to see me through.’

By winning, Murray finally managed to nail a home-town win, his first in four attempts in the Mother City.

Olympic bronze medallist Schoeman was happy, despite not coming out tops. ‘I messed up on the transition as well and had a few problems with my helmet, but I’m still happy to run into second.

‘Even though Richard had that penalty he was still too quick on the day.’

As for Sullwald, the former world junior champion was still seeking consistency. ‘I messed up both my transitions and coach Lindsey Parry may shout at me. But I kept a cool head and worked my way back. On the bike I managed to get away a bit but was then boxed in on T2 and then slipped on the way out.

‘It’s good to be back in the mix and keeping a cool head.’

As for Radford, she looked solid throughout in her first outing of the year as she clocked 1:01:53 compared to Hall’s 59:34.

‘It was a good first outing. I battled to get my wetsuit off, but the bike was fine.

‘It was a bit windy, but you could save energy if you knew where to position yourself. Next up will be the Mooloolaba event back home… always a good event because it’s tough, humid and hilly.’ 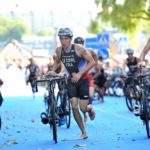 Sullwald 10th in Stockholm as Schoeman sunk by cramps

By GARY LEMKE in Tokyo On the third day of staying in the Paralympic village bubble “it” finally dawned on me. “It” wasn’t the sheer visual aspect of the 4 000-plus Paralympians with disabilities all in the same environment of towering 17-storey apartments and surrounded by a 4km perimeter fence. Admittedly, that is the initial and most common conclusion of… END_OF_DOCUMENT_TOKEN_TO_BE_REPLACED