Triathlete Richard Murray raced to Team South Africa’s first medal of the 2014 Commonwealth Games on Thursday as he ended third in the men’s event at Strathclyde Country Park.

Murray, ranked second going into the race, was beaten by Olympic gold and bronze medallists Alistair and Jonny Brownlee.

Murray’s bronze means that Team SA’s medal chase is now up and running on day one of competition as the team aim to emulate or better the 33 medals won by the Rainbow Nation in New Delhi, India four years ago.

‘Wow!’ was Capetonian Murray’s first comment as the magnitude of his medal sunk in. ‘Halfway through the run I knew just what it means to medal in an event as big as this.

‘I had a nice swim and on the bike I knew that of the three guys up front in the breakaway group that Marc Austin was out of the equation so I just made sure no good runners got ahead of me.’

He also said that a recent rest period had helped him. “I’ve done a lot of racing this year already. This was my 14th race and I’ve still got six to go… obviously the World Series is a big goal as well.

‘But I had a nice three or four day rest last week and I felt really good today.’

Now the focus switches quickly to Saturday’s mixed relay event. ‘We’ve got a really good chance of medalling there. England will be very hard, as will Australia and then the Kiwis are also in the mix but we’re definitely right in there.’

Sullwald was an angry and frustrated young man after his race, after doing a lot of the hard work in the chasing group (in fact he was at the front of the bunch on the last leg of the bike, he punctured).

A sharp expletive was the first thing through his lips as he finished. ‘Four kilometres… just four kilometres from the end of the race and I go and puncture. And did you see just how nice and fast I was running. Just imagine, just imagine how I could have done,’ said the youngster from Bela Bela.

As for Schoeman, who had a great swim to lead the close on 50 athletes out of the water, he also had bike problems.

‘My brakes locked up and I went into the barrier and almost over it,’ he lamented. ‘That took me way off my game then I couldn’t bridge to the front group and the next guys caught me.

‘Then in the run my legs started cramping which is quite unusual, I think I may have made the mistake of taking too many energy gels on the bike. But otherwise, no excuses, now we must concentrate on the relay where there is a definite medal chance.’

With one medal in the bag the team can now concentrate on adding to that tally as the competition moves into full swing.

Picture: Wessel Oosthuizen. For free pictures of all Team SA’s activities at these Commonwealth Games go to www.sascocimages.co.za. 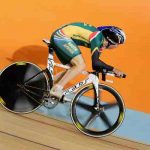 Netballers shine ahead of India