As the indoor swimming swung into action at the 16th Final World Championships in Kazan, Russia, South African ‘newbie’ Ayrton Sweeney could be excused for feeling a bit like a fish out of the water.
After all, there may be only five SA swimmers taking part but he’s rubbing cheeks with  ‘grizzled veterans’ in the shape of Cameron Van der Burgh and Chad le Clos. And even Myles Brown and Sebastien Rousseau, although not exactly old, have a wealth of experience.
But Sweeney, who was SA’s final qualifier in the national trials in Durban earlier this year (causing some confusion by swimming in a cap borrowed from Le Clos), is a laid back character and is bent on soaking up the experience.
That’s despite going into the championships with an elbow that is still not 100% correct. He injured the elbow in a fall not long after qualifying in the 200-metre breaststroke.
‘To be honest, it’s just an absolute blessing to be here,’ the Cape Town youngster told Road to Rio 2016 before his first swim, in the 100m breaststroke heats on Sunday.
‘Across the board, the doctors didn’t think I’d make it here, so I’m just going to go and swim, give it my absolute best.
‘I’m super happy to be here after a long and boring flight (something you also have to learn all about as well) but the pool is great, facilities are awesome so I’m going to give it a good smash.’
Rooming with Rousseau, also a former Capetonan, although these days largely based in the United States, Sweeney says the 100m will be an icebreaker.
‘It’s something of a warm-up for the 200m, so I’ll just go and se what I can do.’
In terms of goals for these, his first world championships, he said: ‘Coach Graham Hill and I have said that anything under 2min 15sec for the 200m will be good but as I say it’s hard to say, not having swum a long course since nationals and the operation.
‘So I’m really here for the experience, and take it all in and get myself on to the world stage leading up to the Olympics next year. It was looking very bleak before but now it’s just a blessing and I’m super thrilled to just jump of the block, dive into the water and swim against the best.’
Apart from Sweeney and Van der Burgh in the 100m breaststroke heats, Myles Brown was in 400m freestyle heat action and Le Clos in 50m butterfly action on the first day. 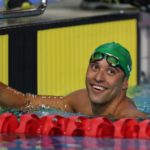 Cameron on what his golden Olympic moment meant