Our London Olympics judoka Jacques van Zyl is back in the swing of things and already taking his first steps on the long road to Rio 2016.

After a first round bye at the London Games, Van Zyl was eliminated in the second round of the -73 kilogram division, going down to Azerbaijan’s Rustam Orujov.

Back in South Africa and tackling the latest four-year Olympic cycle, Roodepoort’s Van Zyl has had to start from the bottom and work upwards. The starting point was the recent national trials in Stellenbosch.

‘The trials were my first competition after the Games and I had to start from scratch,” Van Zyl told Road to Rio 2016. “I had to enter as a wildcard because I wasn’t ranked here in South Africa because I never competed locally last year while I was overseas, preparing for the Games.

“We were five guys in my weight division and I felt really good and confident because preparations had all gone to plan at the High Performance Centre in Pretoria.” The HPC is where Van Zyl is based for the majority of his training regime, under Bulgarian national Nikolai Filipov.

There followed some lightning-quick action for the young judoka. “I finished all my fights under two minutes, I did not want to take any chances so had to finish up quick!” In the final, Van Zyl came up against Nico Louw, who was his training partner in Japan back in 2008.

The next day it was on to the national rankings competition at the same venue and here the competition stepped up a notch. “I fought a weight category up, -81kg,” says Van Zyl. “It was a lot harder but in the end I won, beating Chris Cousins, my training partner for the Olympics, in a hard-fought final.

“So my Road to Rio programme has got off to the start I needed. I’m now preparing for the Africa Championships in Mozambique from 15-22 April.”

Van Zyl also credited Olympic governing body SASCOC with their backing. “Since the Games I’ve been included on the SASCOC Opex programme and that has really helped me a lot with preparations.”

As for the rest of the year? “I’m not entirely sure but maybe World Champs later on in Rio (to get a bit of a taste for 2016). And then maybe the Africa Open in Mauritius at the end of the year. We’re not busy qualifying for 2016 yet, just keeping up and training hard and hoping for a successful year. Our qualifications will only start in 2015 and everything will start getting interesting from there on! But for now I’m on track and working hard towards that 2016 dream,” concluded Van Zyl. 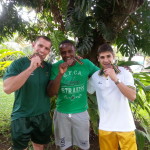 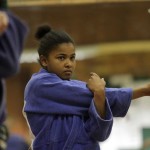 Judoka Geronay uses sport to get a grip on life ahead

By GARY LEMKE in Tokyo On the third day of staying in the Paralympic village bubble “it” finally dawned on me. “It” wasn’t the sheer visual aspect of the 4 000-plus Paralympians with disabilities all in the same environment of towering 17-storey apartments and surrounded by a 4km perimeter fence. Admittedly, that is the initial and most common conclusion of… END_OF_DOCUMENT_TOKEN_TO_BE_REPLACED