Over 140 competitors took to the hot and dry conditions at the opening round of the Stihl 2015 SA National XCO Cup Series, in the Baakens Valley in Port Elizabeth at the weekend, with Olympians Philip Buys (Scott Factory Racing powered by LCB) and Candice Neethling (Pam Golding/Freewheel Cycology/Specialized) taking the victories in the Elite Men and women categories respectively.
UCI points were up for grabs in the Elite Men and Elite Women’s UCI Category 1 event, which contributes towards rankings for the Rio 2016 Olympic Games.
Buys and James Reid (Team RECM) were the only riders to post a sub 16-minute first lap when they leapt off the start to get an early lead in the Elite Men race. The end of lap one saw Buys ahead followed by Reid, Gert Heyns (Scott Factory Racing powered by LCB), Brendon Davids and Alan Hatherly (both Kargo Pro MTB Team), Rourke Croeser (Team Full Dynamix), Swedish National Champion Emil Lindgren (Kargo Pro MTB Team), Matthys Beukes and Arno du Toit (both Scott Factory Racing powered by LCB) and German Martin Frey (Bulls).
The penultimate lap saw Buys still ahead, but Davids and Hatherly were closing in fast, posting lap times that were 14 seconds fasters than Buys’. Davids’ teammate, Lindgren, also put the hammer down and gained substantial ground to move up to third place, passing teammate Hatherly in the process.
In the end, Davids caught Buys but couldn’t close the 1.1-second gap just metres to the finish line as he chased hard, with world ranked number 9 Lindgren finishing in third place 26 seconds off the winning time.
The technical rocky track suited Buys as he continued increasing the pressure to extend his lead, stretching his lead to almost a minute at one point in the race. ‘I wanted to go hard from the start to test the legs,’ said Buys. ‘I knew the contenders were close on my wheel and I had to increase the pressure, but I could see the guys coming back strong. I then had to slow a bit to keep something in reserve for the last punches if they caught up to me towards the end.’
Buys, racing for the UCI registered MTB Team SCOTT Factory Racing powered by LCB, was dubious prior to the race as he had been busy with his team launch ahead of the Cape Epic over the past two weeks, and was worried about his shape for the National Cup event.
‘I’ve worked really hard these past few months, so the race was good confirmation that my shape is there, especially ahead of ’Epic. Our primary team goal is to earn UCI points this year, and the Cape Epic is also a big goal for us. We bounce back from ’Epic pretty well, but the next two weekends straight after might be a struggle. But we will be back on track to top form around the World Champs dates later this year.’
The Elite women’s race saw Candice Neethling take full command on the demanding course, leading from the start on the five-lap race. Neethling’s closest rival, Cherie Vale, finished the race six-and-a-half minutes back.
A noticeable absence was Mariske Strauss who is still dealing with a niggling injury that she sustained during a big crash in the Commonwealth Games last year.
Neethling’s victory came despite a big crash on the second lap, where it appeared that a branch had pierced her leg. ‘The course was quite technical and I was going down a very steep descent with a sharp right turn at the bottom, which was quite powdery,’ said the London 2012 Olympian.
‘I could see that I wasn’t going to make the turn and I fell down. I really don’t know what happened, but I must’ve fallen on some branches. I didn’t know anything bad had happened until I looked down at my leg later on and saw a hole there.’ She received five stitches after the race.
Neethling said that the course was tough to race on. ‘I think everybody felt the same way, it was a really technical track. And it was so hot and humid in the valley that I couldn’t wait to get to the windy sections to cool down.
‘There wasn’t much room to overtake, and I gave that much thought beforehand, which is why it was important for me to get a good start. I managed to keep the gap open and just put the hammer down the whole way. I’m very happy with a first place. I could feel that I was losing concentration on the obstacles in the last laps, and I was super impressed with the level of riding from the junior and youth girls!’
Focusing well in the build up to the National Cup race, Neethling had been racing some marathon events and carrying out some short and sharp training for XCO-style racing. ‘The XCO training has definitely helped and I could feel it on Saturday, and the endurance from the marathon racing kicked in on the last laps. I think I’m getting the balance right. I’m racing on my own this year, with support from some sponsors, Pam Golding and Freewheel Cycology; so I don’t have a team set up,’ said Neethling.
The Junior Men’s race was a tussle between local rider Marco Joubert (Kargo Pro MTB Team) and Julian Jessop (Specialized Concept Cyclery). Joubert, who spent a lot of time building the top-class course in PE with his father, Charl, won by a large margin of 2 minutes 51 seconds ahead of Namibian Tristan de Lange. Jessop finished in third place without a saddle, which would’ve been most taxing on his legs on the demanding course.
Genevieve van Coller took the title in the Junior Women’s covering three laps of the 4.7km track ahead of Christine Roda (2nd) and Saffron Vosloo (3rd). 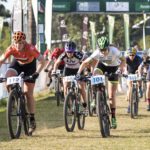 Du Toit back on home turf for KZNMTB champs 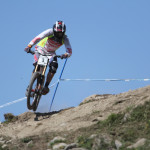