Sunday’s 2016 Ozzie Gladwin Canoe Marathon presented by Parklane Superspar represents a golden chance for paddlers to clear any lingering early-season cobwebs while the sport’s elite will go head to head for this year’s KZN K1 River Marathon Championships crown.
With next year’s FNB Dusi Canoe Marathon now just 12 weeks away, racing snakes and social sloggers alike are set to turn to the 26-kilometre clash from Albert Fall Dam to Thornvale Farm to clear any last remaining river rust as they continue their journey towards February’s iconic Pietermaritzburg-to-Durban encounter.
The front of the men’s race will be another richly competitive affair as some of the country’s, and even the world’s, best marathon competitors square off at the sharp end of the field.
The double defending champion, Euro Steel’s Andy Birkett, will undoubtedly be eager to make it three from three and continue the trend that has seen his success at the Ozzie Gladwin pave the way for victory in the FNB Dusi the following year.
Birkett’s 2014 Dusi-winning teammate, Euro Steel/Red Bull’s Sbonelo Khwela, will however himself be aiming to finish aloft the podium this weekend as he looks to build on his win at the recent Umpetha Challenge.
The Ozzie Gladwin’s most successful paddler, ten-time winner Len Jenkins Jr, was another notable name to surface in the closing stages of the entry process and having spent some time away from the sport since this year’s Dusi, may well add a fascinating element to Sunday’s racing.
Add to that the likes of Build it/Williams Hunt’s Thulani Mbanjwa, Euro Steel’s Banetse Nkhoesa and Computershare Change a Life Academy’s in-form Lucas Mthalane in a tussle for a top-five finish, and it’s set to be a hard-fought affair.

The women’s clash too will be a mouth-watering contest as the paddling fraternity get their first look at Euro Steel/Gara Racing Paddles’ Abby Solms (pictured above) going head to head with 2012 Olympic bronze medallist Bridgitte Hartley on local KZN waters.
As Hartley continues her exploration into marathon paddling and Solms having dominated South African paddling circles in recent years, the match-up is an intriguing one ahead of next year’s Dusi.
Recent rains have been a welcome sight for all, however, the impact on dam water levels has been negligible and the drought’s grip continues to leave paddlers scratching for precious opportunities to hone their river marathon skills.
As such, Sunday’s clash presents many ‘weekend warriors’ with a rare opportunity to continue their clocking up of early-season miles while the race’s status as a front-row seeding race for next year’s Dusi will add some extra spice to the mix for the field’s elite competitors.

Pictures of Birkett and Solms courtesy of Anthony Grote/Gameplan Media 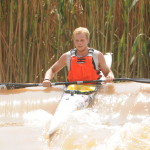 Olympian Hartley gets ready to head for Europe

Tokyo looms, again, We don’t know for sure in what shape of form the Olympics and Paralympics will take place in July to September and if anything 2020 taught us to take nothing for granted. What we do know is that if Tokyo 2020 +1 does go ahead, it will do so against a new-found back drop where simply taking… END_OF_DOCUMENT_TOKEN_TO_BE_REPLACED