An eight-strong squad will do duty for Team South Africa at the P1 Para-cycling continental road championships in Ghana this weekend.

The team left on Thursday for Accra where the challenges of the Kanda Highway route that has been selected by the event organisers, and a hot and humid climate, await our riders.

The team, under the captaincy of experienced and very competent James van Rensburg, has been selected with a number of very definite strategic objectives in mind. ┬áForemost in this regard is the opportunity being given to three previously disadvantaged riders whose passion for, commitment to, and competitive ability in cycling deserves recognition.

ÔÇ£These are attributes that are demanded of any rider selected to the national team, but it is in direct response to the imperative for transformation in South African cycling that the three PDI riders are being given their fully deserved opportunity to show what they are capable of,ÔÇØ said CyclingSA’s Para-cycling Director Dr Mike Burns.

Thabo Sesing, Yusthin Lintnaar and Keenan Bickle will have the country’s entire Para-cycling community behind them as they venture into the world of international cycling for the first time.

Also participating for the first time in an international event will be C4 hand cyclist Andries Scheepers, and the tandem pair Lourens de Kock (pilot) and Frans Bezuidenhout (stoker). ┬áIn terms of national standings, Scheepers is ranked 2nd behind World Champion Ernst van Dyk, whilst de Kock and Bezuidenhout are the country’s top performers in the visually impaired class.

ÔÇ£Cognisant of the critical contribution of mentorship in actualising the potential of development riders, the team captain clearly has an important role,ÔÇØ continued Burns.┬áÔÇ£James van Rensburg is South Africa’s top C5 road cyclist and has the experience of two UCI Para-cycling road World Championships to share with his teammates.ÔÇØ ┬áAlso expected to contribute in this regard is experienced tri-cyclist Madre Carinus, who is currently ranked fourth in terms of UCI world rankings.

ÔÇ£There is every chance that the team will return with one or more riders having achieved Continental Champion status,ÔÇØ said Burns. ÔÇ£Also important in this regard will be the nation points that they accumulate in order to position South Africa to secure the optimum number of slots at the London 2012 Paralympic Games.ÔÇØ

Nothing will be taken for granted in terms of the competition that will be in Accra this weekend and the racing is expected to be a nail-biting affair. 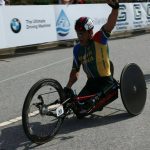 Ernst sprints to World Championships gold in US

By GARY LEMKE in Tokyo On the third day of staying in the Paralympic village bubble “it” finally dawned on me. “It” wasn’t the sheer visual aspect of the 4 000-plus Paralympians with disabilities all in the same environment of towering 17-storey apartments and surrounded by a 4km perimeter fence. Admittedly, that is the initial and most common conclusion of… END_OF_DOCUMENT_TOKEN_TO_BE_REPLACED