Evans Maripa, South Africa’s top-ranked men’s wheelchair tennis player, has taken fourth place in the UNIQLO Tennis Doubles Masters in Mission Viejo, southern California.
A 2012 London Paralympian, Maripa teamed up with Shingo Kunieda of Japan, the world’s top-ranked player.
They started their round robin campaign with a confident win against Brazilias Medeiros and Rodrequez, 6-4 6-0. They went on to win two of their three round robin matches, losing only to the French Open Grand slam winners Joachim Gerard (Bel) and Stephane Houdet (Fra) 3-6 4-6.
In the semi-finals Maripa and Kunieda faced the winners of pool two, Jeremiasz (Fra) and Gordon Reid (Gbr), losing in a closely contested match, 1-6 6-4 2-6.
The third and fourth place play-off saw Maripa/Kunieda vs Fernandez (Arg)/Peiffer (Fra). It was the extremely determined team of Fernandez and Peiffer that took third place, beating Maripa and Kunieda 6-1 6-1.
Roland Garros champions Gerard and Houdet beat Jeremiaz and Reid 6-4 6-1 in the finals to win their first Doubles Masters title together and Houdet becoming the first player to win three back-to-back Doubles Masters titles. WTSA’s Director and Coach Holger Losch said: ‘The men’s division is extremely competitive with no shortage of talent. Evans did well to qualify and finish in the top four teams in his debut appearance at for the UNIQLO World Doubles Masters.’ 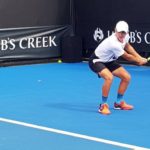 Henning can hold head high after his display Down Under 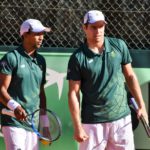