Our Paralympic athletes were very much in the spotlight at the 2013 Stellenbosch University sports awards in the Boland this week, writes Mark Etheridge.

won the annual Sportsman/woman with a disability award.

Speaking to Road to Rio 2016 after the awards, Bouwer said: “This is the second time that I’ve received this award. It’s a huge honour to know that I was the best achieving athlete for the last two years. Hilton [Langenhoven, athlete] was also a nomination and I must again wish him well for his medal at the IPC Athletics World Championship earlier this year.

“It was great fun to spend the evening’s celebrations with my coach, Pierre de Roubaix, as well.”

Renowned coach Suzanne Ferreira who had many track and field representatives in Team SA at last year’s Paralympics, won the award for Individual Coach of the Year and there was also a special award for bronze medal-winning swimmer Hendri Herbst (academic and sporting excellence).

Hayes is just one who falls under Ferreira’s wing. “It’s really cool if the hard work is rewarded at the end of the day,” she told Road to Rio 2016. I think that this is now the fourth time that I’ve received this award. It just reminds me again how important determination, courage and perservance are.. as is one’s passion for the sport.” 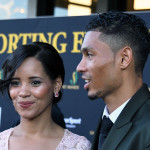