South African archery has another feather in its cap after they won bronze in the compound mixed team category at the World Championships in Copenhagen, Denmark, writes Mark Etheridge.
Doing the job for South Africa were Patrick Roux and Sera Cornelius.
The Danish delight of the mixed team means that South Africa, in six international world ranking events in the last two years, has now won eight medals in this period.
The world’s top archers were put through the qualification process in the space of a day, shooting their 72 arrows ranking round despite all the best efforts of the weather to delay the process. The weather was very unpredictable with a persistent wind, with strong gusts at times as well as rain.
South Africa’s compound men were ranked 12th (Patrick Roux) 16th (Albertus Cornelius) and 25th (Gabriel Badenhorst) while the men’s compound team were ranked second after the seeding round of 72 arrows.
The compound women’s team were ranked 11th. Cornelius ranked 10th, Jeanine van Kradenburg 31st and Gerda Roux 66th.
In the largest recurve archery line yet seen in history, 2012 London Olympian Karen Hultzer ranked 71st and Sandra Prinsloo 110th. In the men’s category Marco di Matteo ranked 117th and Terence van Moerkerken 168th.
The championships saw 623 athletes from 96 nations in action. During the event, 31,200 bottles of water were drunk during the 107 match sand more than 55,000 arrows were fired off. 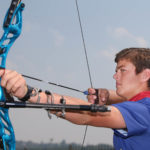 Archers guaranteed at least one medal at World’s

By GARY LEMKE in Tokyo On the third day of staying in the Paralympic village bubble “it” finally dawned on me. “It” wasn’t the sheer visual aspect of the 4 000-plus Paralympians with disabilities all in the same environment of towering 17-storey apartments and surrounded by a 4km perimeter fence. Admittedly, that is the initial and most common conclusion of… END_OF_DOCUMENT_TOKEN_TO_BE_REPLACED