Commonwealth gold medallist judoka Zack Piontek did his chances of being part of the South African team at this year’s Rio Olympics no end of good with a bronze medal at the Pan American Open tournament in Lima, Peru on Sunday.
The tournament was won by Denisov Kirill (Russia), world No7 in the under-90kg category. Italy’s Walter Facente won the silver medal while Piontek and Brazil’s Eduardo Bettoni were the joint bronze medallist winners.
Monday’s latest international rankings show that Tuks/HPC’s Piontek is ranked 28th. The top 22 judokas in the under-90kg category automatically qualify a slot to compete in Rio. Each country is only allowed to enter only one judoka per category and many countries have more than one athlete in the top 22.
Piontek took Road to Rio 2016 through his tournament. ‘It was a very good tournament for me with two of the world’s best judokas in the -90kg category.
‘I had a first round bye then came up against Australia’s Diego de Souza Barreto. I won this one on points but it went the whole five minutes.
That saw him coming up against Britain’s Frazer Chamberlain. ‘He was a hard opponent. We were very equally matched but near the end he launched a weak attack and I jumped on him for the pin and held him down for the win.’
Into the semi-final went Piontek against Facente. ‘Unfortunately here I was thrown very early in the match. He simply had a good technique and caught me nicely. So I lost that one but went through to the bronze final.’
The bronze final against Bettoni was Piontek’s fourth fight of the day and he had to battle from behind.
‘I had three shido’s (penalties) against me, meaning that if the fight went the full distance he’d be the winner. But with 39sec to go I threw him for a waza-ari score and then with 20sec left to go did the same thing. Two scores of waza-ari automatically convert to a match-winning ippon which saw me win gold.’ 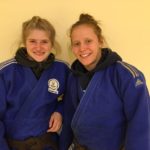 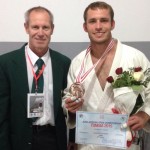