Haydn Porteous saw a two-footer for par eventually go in on the 18th hole at Millvale Private Retreat on Saturday as he scraped home to a one-stroke victory in the finale of the Chase to the Investec Cup.
But the big winner was Dean Burmester, who pocketed a cool R4-million for topping the points list for the Investec Cup Bonus Pool.
Porteous’ win came at the expense of Brandon Stone, who hit his approach to 18 into a lateral water hazard and dropped a shot after the pair had walked to the 18th tee all square thanks to a third short putt missed by Porteous in a nervy final round.
‘I missed a couple of short ones in the beginning of the round and under that sort of pressure it’s tough to forget about it,’ said Porteous. ‘Unfortunately I couldn’t control it and I missed a couple more and I started to get a little bit frustrated.
‘On 17, I should never have missed that putt, but when things start going a little bit south, they go south quickly. Luckily I could do it with my putting stroke how it was. Hats off to Brandon, he stayed in the game. He wasn’t hitting it as well as he usually does.’
Burmester finished in third place in the finale, but his lead was never going to be challenged during the week after a chase which included four victories and seven more top 10 finishes – eight with his performance at Millvale.
‘I was really happy with the two second-places coming into the week and that allowed me to play with a bit of freedom here. That didn’t help – so maybe I need to be under a bit of pressure,’ he laughed. ‘But credit to Haydn. He played phenomenal golf. He was 12-under this week. That’s a stroke average of 69 around here, and the conditions today were really tough with the wind blowing like it did.’
Stone held things together nervelessly, keeping bogeys off his card all the way until the 15th, where he dropped a shot. ‘I think the big turning point was 15 where I made birdie and he made bogey,’ said Porteous.
But there was still work to be done. ‘Unfortunately for Brandon, he hit it into that fairway trap on 18 and that’s a tough shot from there. Then he hit it in the water, but at the end of the day it can happen, and I did my best to just stay with him,’ said Porteous.
After the tumultuous start to his year with victory in the Joburg Open, Porteous will take the memory of this win with him to the Open d’ Espana on The European Tour on April 14.
For Burmester, there is a need to strike while the iron is hot: He is ranked inside the top 100 in the world, and has been invited to play in the Puerto Rico Open. ‘I hope I can get into the Shell Houston Open the next week,’ he said. ‘I want to get into the world’s top 50 and make the Masters. If I don’t go, I won’t have a chance. Then I’m off to China and Morocco and Mauritius, and in between all of that, I’ll be squeezing in the defence of my title in Zimbabwe.’
And victory in the Golden Pilsener Zimbabwe Open was where it all started for Burmester.
Who knows what the win this week will mean for Porteous in a year’s time. 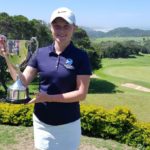 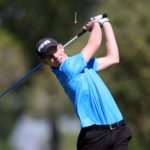 Vorster to the fore as SA team head to Italy 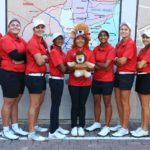 Woo-Ju to the fore as Gauteng lead in Polokwane