Another three countries have seen the Queen’s Baton Relay for the 2018 Commonwealth Games in Gold Coast come to their shores after it passed through Tanzania, Seychelles and Mauritius.

After touring Kenya, the Baton was taken to Tanzania, the eighth leg of the relay for the Games in Australia, writes George Thorpe from www.insidethegames.biz

During its time in the east African nation, it was taken to the National Stadium in Dar es Salaam.

It also visited the city of Arusha where the Baton was taken to the School of St Jude, which was set up in 2002 to provide free education in a private school setting.

After Tanzania, the Baton went to the Seychelles, where it visited 23 schools on the nation’s main island Mahe.

The Baton was also carried by lifeguards, who had been trained by Australians, in a surf rescue boat at the Anse Lazio beach.

It was also taken by an ox-drawn cart to meet the Aldabra giant tortoise, one of the world’s oldest living creatures.

The tenth stop of the Baton relay was Mauritius where it was met by President Ameenah Gurib-Fakim, who started the relay from State House. Swimmer Bradley Vincent, who became the first Mauritian to make it through the qualifying rounds of the Games when he did so at Glasgow 2014, was another Baton carrier.

The Baton is currently in Malawi and will then head to Zambia, Namibia and Botswana before arriving in South Africa next month.

Each member nation of the Commonwealth will have the Baton pass through their country before the 2018 Games, which are due to run from April 4 to 15.

In the photo, the Baton is pictured with a lifeguard at Anse Lazio beach in the Seychelles 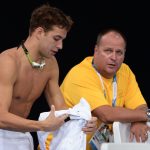 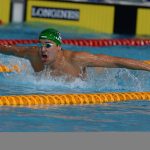 Piketh and Donnelly stay on track Down Under