Rik de Voest fell at the final hurdle of qualifying for the Australian Open tennis tournament in Melbourne on Saturday.

After coming through the first two rounds of qualifying the South African was involved in a third consecutive three-setter.

And it proved a match too far as he went down to Italian Matteo Viola.

But the game’s not yet up for De Voest down under as, due to his high seeding and the fact that he got to the final round of qualifying he was drawn to be first lucky loser.

“If any player withdraws from the main draw then I’ll replace that player and get a chance to play,” De Voest told Road to London 2012 shortly after his match. “I need some luck and my fingers are crossed I get some, and then will make use of the opportunity.”

Seeded 11th for the qualifying stages, De Voest went down to the 27th seed after winning the first set. The final score was 4-6 7-6 6-4 in favour of the Italian.

De Voest had a better first service percentage (73% to 63%) but was unable to come up with any aces while Viola had two aces of his own.

It was in points won on own serve that the Italian had the upper hand with a 62%-54% advantage on his first service.

“Yeah, was a tough one to lose,” said De Voest. “I was up a set and 4-3 serving, so had my chances, but my opponent fought hard and came up with some good passing shots when he needed them.”

Meanwhile our top ranked men’s player, Kevin Anderson has established that he’ll come up against qualifier Frederik Nielsen of Denmark in the first round. Seeded 30th for the year’s first grand slam, Anderson will fancy his chances against the 28-year-old Dane, ranked just 240th in the world.

Our leading women’s player, Chani Scheepers, faces former world No2, Svetlana Kuznetsova of Russia in the opening round.

Chani out in Paris 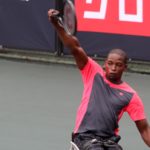 Double delight for Maripa in Israel

By GARY LEMKE in Tokyo On the third day of staying in the Paralympic village bubble “it” finally dawned on me. “It” wasn’t the sheer visual aspect of the 4 000-plus Paralympians with disabilities all in the same environment of towering 17-storey apartments and surrounded by a 4km perimeter fence. Admittedly, that is the initial and most common conclusion of… END_OF_DOCUMENT_TOKEN_TO_BE_REPLACED