African Youth Games team member Catherine Colyn has saddled up for her first race in the senior ranks… and it proved to be a big bridge to cross.
The talented Western Cape teenager, who finished matric last year, described the move up from Junior to the Elite ranks as ‘the hardest step I’ve ever had to do.’
So the BestMed team rider can be rather pleased at the fact that she ended up as ninth quickest elite women’s rider at the Pennypinchers national road championships in Mbombela, Mpumalanga at the weekend.
The race was won by Olympic and Commonwealth ace Ashleigh Moolman Pasio who covered the 114-kilometre course in 3hr 18min 46sec. Colyn was only a minute and 13sec off the pace after the morning’s racing.
That also made her second Under-23 rider behind another Commonwealth Games rider Heidi Dalton.
‘With the elite women not having an U23 age group it’s quite a big jump from junior to elite,’  Colyn told Road to Rio 2016. ‘Our race consisted of eight laps and Ashleigh made the race harder and harder each lap by attacking on every drag.
‘Half way through the race the bunch was whittled down to about 10 riders. The last 10km of the race I wasn’t able to follow the big attacks and got dropped, although I was able to bridge the gap every time I was dropped.
‘On the last lap Ashleigh attacked on the last drag and I didn’t have the legs to stay with the bunch. I tried my best to bridge the gap coming into the stadium but I had nothing left in me.’
Remarking on the big step-up in levels she said: ‘It’s just the whole speed and distance of the race and the sheer strength of the riders as well as the different levels of riders in terms of  years of experience.
“The course didn’t really suit me but you always have to adapt and try your  best. I would have liked a top five but I’m still happy with my result.’
Next up for the youngster is the Tour de Boland and Argus Cycle Tour (both next month). ‘I really want to do well at the Tour de Boland, especially as it’s on home turf. The RECM girls will be there as well as a few other strong mountain biking girls who are based in Cape Town so it’s going to be hard.’

Picture (Colyn is fifth from right in the Bestmed kit) courtesy of www.craigdutton.com 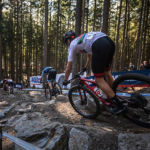 Sauser back for Epic

Tokyo looms, again, We don’t know for sure in what shape of form the Olympics and Paralympics will take place in July to September and if anything 2020 taught us to take nothing for granted. What we do know is that if Tokyo 2020 +1 does go ahead, it will do so against a new-found back drop where simply taking… END_OF_DOCUMENT_TOKEN_TO_BE_REPLACED