Any triathlete who aspires to win a medal at the Commonwealth Games in Glasgow will have a ‘battle royal’ on his or her hands, because some of the best triathlon athletes come from the Commonwealth countries.

This is not necessarily the case in some of the other sports.

Another eight Commonwealth athletes are all ranked in the top 30.

As far as the women are concerned there are five Commonwealth athletes ranked in the top 10.

These rankings could be quite intimidating if you are a novice and competing in your first year as pro-elite, but our own Wian Sullwald is adamant not to be intimidated by these names and numbers.

ÔÇ£Don’t get me wrong. I do respect the senior athletes and their achievements, but in my opinion any athlete is only as good as his last race.┬á Come race day the playing field will be level.ÔÇØ

This approach may sound somewhat ‘cheeky’, but the former junior world champion has already proved this season that he is able to keep up with the world’s best.

During the ITU World Series event in Cape Town television commentators were baffled when they saw this unknown athlete running shoulder to shoulder with the best and they wondered who this man Sullwald was.

Sullwald lost some time during the run, but that was to be expected because he has not physically reached his peak. If everything goes according to plan he should be at his best in two to three years from now.

Sullwald is somewhat frustrated by his recent performance at the World Series event in Chicago. He finished 41st, more than five minutes behind Gomez, the winner, but a close study of the results shows that he has nothing to be ashamed of.

Sullwald’s swim was merely two seconds slower than that of the Spaniard and on the bike he was 20 seconds slower. Unfortunately he lost five minutes on Gomez during the run because the extreme heat caused his ‘wheels to come off’.

If these two performances are taken into account, it is clear that Sullwald should have a realistic chance of finishing among the top 10 at the Commonwealth Games, especially with a bit of luck on his side and if he manages to run the last 10 km in close to 32 minutes.

This should be a realistic goal because he won the Chengdu World Cup in China by running the last 10km in 31min 11sec. 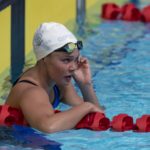