The Rosina Sedibane Modiba Sport School’s boys soccer side are safely back home after representing South Africa at the ISF World Schools Football tournament in Bordeaux, France and returned home proudly with the Fair Play Award.

This was the third time that the school had taken part in the tournament and their trip was made possible through unwavering support from sponsors Metropolitan. The team left South Africa after an official send-off from sports governing body SASCOC, the first time that they had such a send-off.

First match was against Brazil and won 3-0 by the South Africans. They then went on to draw against Hungary and Romania, the score 1-1 on both occasions.

After beating Greece 4-0, the SA side ended second in the group. They then played Turkey in the quarter-finals, and went down on penalties.

That meant they played for the fifth/sixth position against France and once again went down on penalties after being locked at 3-3 after extra time.

They lost their seventh/eighth spot tie 3-1 to Slovenia.

Another highlight was the fact that Isaac Arendse was appointed to serve on the ISF Football technical team.

Banyana up for battle against Botswana 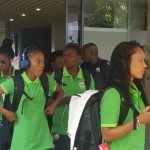 Productive camp for Banyana ahead of French clash 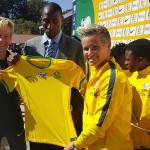 Banyana Banyana visit the next generation of stars in Tembisa

Tokyo looms, again, We don’t know for sure in what shape of form the Olympics and Paralympics will take place in July to September and if anything 2020 taught us to take nothing for granted. What we do know is that if Tokyo 2020 +1 does go ahead, it will do so against a new-found back drop where simply taking… END_OF_DOCUMENT_TOKEN_TO_BE_REPLACED