South Africa’s para-cycling track team are heading off to New Zealand and will compete against some of the world’s best at the UCI Oceania Track Event next week.

The four-day competition which will be held in Invercargill, starts on Monday and ends on Thursday.

The P1 status of the event will enable riders to gain valuable points towards their UCI individual world ranking and South Africa’s nation ranking in this critical build-up period ahead of the London 2012 Paralympic Games.

One such athlete eager to gauge the results of her new high-performance training program is 23-year-old Stellenbosch resident Roxy Burns. Burns, who started competing at the age of 12 in a Western Province team, was ranked first in the world by the UCI in her C4 classification for 2010.

Looking back, she recalls how ÔÇ£at the age of 12 it was all fun and gamesÔÇØ, and soon realised there’s no fun in only beating herself every time. ÔÇ£Now at international competitions I enjoy the competitiveness of the international riders,ÔÇØ says Burns. ┬áÔÇ£In South Africa I have no competition (I am the only female C4 in the country taking part in cycling). It is so much more exciting to measure yourself against people rather than just your own times.ÔÇØ

Working with coach Ian Rodger and high-performance specialist Ben Capostagno has made a remarkable difference to her training regime. ┬áÔÇ£It is nice to know that there is a support team monitoring my progress and if there is something that is not right it will be picked up immediately, even before I know,ÔÇØ says Burns. ÔÇ£The ability to ask advice and the knowledge that experts are monitoring my progress is comforting indeed.ÔÇØ

In addition to spending the past few months honing her particular track racing skills, Burns has also focused on strength training in the gym at the Sport Science Institute of South Africa (SSISA) in Cape Town.┬áThis is clearly reflected in her on-track performances. With the 500m time trial being her main focus, Burns has worked hard on speed drills and explosiveness. ┬áÔÇ£We have also been working on pacing for the 3000m pursuit, so that I can maintain a steady pace throughout the race and not ‘blow’ in the first 500m,ÔÇØ adds Burns. 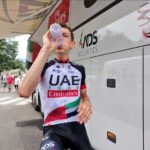 Hoffman on a high