The South African Sprint Trials take place this weekend at Nagle Dam outside Pietermaritzburg. The Trials are used by Canoeing South Africa to select a national squad that will compete overseas at two World Cup events, the Bochum Regatta and the Junior and Senior Sprint World Championships from May to August.┬á

South Africa’s seven sprint canoeists at last year’s Beijing Games achieved mixed results, but this year sees the start of a new cycle of training towards the London 2012 Games. Having recently received substantial funding from The National Lottery Distribution Trust Fund, the sport has been earmarked as a strong medal contender for 2012.

Headlining the Men’s category is Olympian paddler, and multiple national champion Shaun Rubenstein, who narrowly missed out on making the K1 500m and K1 1000m A-Final in Beijing. Having won medals at international World Cups before, his experience and supreme conditioning make him a firm favourite across all three compulsory events ÔÇô the 1000m, 500m and 200m. ÔÇ£It’s been a huge change-around this year after my coach left for Hungary, and I’m using a completely new approach. But it’s been really enjoyable and I’m looking forward to seeing some results this weekend,ÔÇØ said Rubenstein.

In excellent form is K2 Marathon World Champion Cam Schoeman, who was crowned Victor Ludorum at last weekend’s KZN Sprint Champs after winning gold in the K1 1000m and K1 500m. Schoeman’s Marathon World Champion partner and current Dusi champion, Ant Stott, will also be a contender, having won silver in the K1 1000m at the KZN Champs. Stott has been in a training group with Mike Arthur, Nic Burden and Nick Stubbs, who are all names to look out for at the Trial. Stuart Waterworth has stepped promisingly into the senior ranks, and will be a real threat to the established stars.┬á

Another big name entrant is 2007 K1 Junior Marathon World Champion Grant van der Walt, enjoying his first year as senior competitor. The Gauteng paddler won last weekend’s SA Single Surfski title at Plettenberg Bay, and is one of the most talented canoeists of his generation.

Three of the five ladies who raced in last year’s Olympic Games have entered the trials, including Jen Hodson who made the K1 500m A-Final in Beijing, and Carol Joyce, who joined Hodson in the K4 that made the Olympic A-Final. The pair have been competing a lot in the river and surfski races, and it will be interesting to see how this affects their sprint performances. On the other side is Bridgitte Hartley, who has focused only on sprinting. Having lost out to Hodson for the SA K1 Olympic position last year, Hartley went on to win a gold medal at last year’s World Cup in Poland, and if her improvement over the last two years continues she will be a strong contender on the world stage in the coming years.

The junior categories are always well contested, with girls star Emma Horner in sublime form. Although still U16, Horner recently broke the SA U18 girls K1 500m record, and her times at last weekends KZN Sprint Champs were the fastest out of all female categories. She will come under far greater pressure this weekend though, with Western Province 2008 Junior Sportswoman of the Year Melanie van Niekerk, and Gauteng’s Esti van Tonder holding heaps of talent and more experience.

Gauteng’s Martin van den Bergh and Frans Smit look set for an epic showdown in the U18 Boys category when they go head to head with KZN’s Stu MacLaren and Gregor Martin. All four can turn up the pace at will, although MacLaren might take a slight advantage into the weekend having narrowly won the KZN Victor Ludorum last weekend. 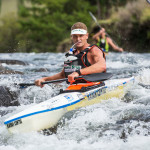 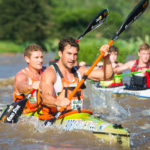 All systems go as Birkett/McGregor start as Dusi favourites

Tokyo looms, again, We don’t know for sure in what shape of form the Olympics and Paralympics will take place in July to September and if anything 2020 taught us to take nothing for granted. What we do know is that if Tokyo 2020 +1 does go ahead, it will do so against a new-found back drop where simply taking… END_OF_DOCUMENT_TOKEN_TO_BE_REPLACED