British swimming star Keri-Anne Payne is the most successful swimmer in the history of the aQuell├® Midmar Mile, with seven victories to her name.

The two-time world champion admitted at the official press launch of the 2012 Midmar Mile in Pietermaritzburg this week that winning seven titles had long been a goal of hers.

Born in Johannesburg, Payne lived in South Africa until the age of 13 and had her first taste of the world’s largest open water swimming event before she relocated to the United Kingdom. Yet her memory of winning the Midmar Mile 13-and-under title remains clear and a big highlight in her career with the subsequent few moments after her success having driven her to achieve what she has.

“It was my first win and my family was ecstatic,” she recalled. “My dad’s done it [swum the Midmar Mile] something like 15 times, so it was always a really big family thing that we did. I love coming back because it’s such a good memory from when I was a kid.

“I remember my dad and brother saying to me ‘well done, that’s really good but that Natasha Figge, I am not sure that there will ever be anybody as good as her!’. That was it for me. I decided then and there I wanted to be better than her!

“I guess I can thank my brother and my dad, and their love of Natasha Figge, for pushing me on and going for the most number of wins.”

As of 2012, Figge had six wins to her name whilst Payne owns the record with seven.

Usually Payne, who finished an unfortunate fourth in the 10km open water swim at the 2012 London Olympics, would be accompanied by a British team at the Midmar Mile. However, things are somewhat different this time around.

“I’m here on my own this time,” she said. “Normally I would have come across with my old club, Stockport, but that’s not happening this year. I’m actually training with Chad [Ho, the three-time men’s champion]. I owe him a training camp,” she chuckled.

“He came out and did an altitude training camp with me in Spain. He was my training partner and he was the biggest help possible. I owe him so much for helping me by coming out there, so I decided to come here a bit earlier [than usual], just to get a bit more distance training in and repay the favour that Chad did for me last year before the Olympics.

“It’s really good to be here and to give something back to the Midmar Mile,” she added, “the organisers have been brilliant to me. This is my eleventh swim, which is something I’m so glad that I could do, and I’m so grateful to [event organiser] Wayne [Riddin] for helping me do that. Without his help and support it wouldn’t have been possible for us [the British swimmers] to have come out here as regularly as we have.”

Life has changed for Payne since the London Olympics. “It has been completely different, to be honest,” she said. “I took a long time out of the water after London. I got married in the middle of September, so I didn’t really get back into the water until the middle of November, and I wasn’t doing much swimming.

“In terms of training, I’ve only just got back [into it]. This is my fourth week of proper swimming, but it’s what I needed.

“I needed that time to refocus and get back to enjoying swimming again. So that is what this year, for me, is all about. It’s all about getting in the water, enjoying it and doing the races I have always done since I was a kid, and the Worlds ÔÇô just doing those races, but really just trying to enjoy them, taking all the pressure off.

“There’s no pressure on me. I’ve achieved and I’ve proven myself time and time again, so this year is about enjoyment and keeping my mind in the game so I can carry on for the next couple of years. Really, at the moment, I’m taking it a step and a competition at a time.”

For many South Africans, Payne remains a daughter of the country and they’re happy to tag her as ‘one of our own’. After all, this is where she learnt to swim. Until recently, her South African coach Di Williamson was the only female coach Payne had swum under and now she’s doing it once more.

After marrying former Scottish swimming star David Parry in September, Payne moved to Edinburgh, where she joined the Warrender Baths Club and she couldn’t sound happier about the move. “Edinburgh is such a nice place and I’m really happy up there,” she said.

From previously swimming in a group of eight swimmers, she’s now one of a group of 25 at Warrender, but the bigger numbers don’t bother her in the least.

“They’re such a great club. They have a brilliant coach and there are lots of really good kids there as well, so it’s a nice challenge for me, and it’s getting me back in the pool and getting the spark back, racing all the youngsters.”

The club’s coach is Laurel Bailey, an Australian, and Payne is thrilled to be working with her. “I must admit she’s such a brilliant coach. She really understands and has taken her time with me because she’s realised that I’m 25, I’ve been swimming competitively for 13 years, so she’s just trying to keep me excited and fresh in the water as well, so it’s been a really good change.”

Some things, though, do not need to change. Like the aQuell├® Midmar Mile. It has been a constant on Payne’s calendar ÔÇô even last year, when London hosted the Olympics and she’s happy to return once more, aiming for a remarkable eighth title.

If she adds another win to her superb record, she can be assured that the huge crowds at the popular event will celebrate her success like they would celebrate any other South African victory.

The aQuell├® Midmar Mile takes place on 9 and 10 February at the Midmar Dam, just outside Howick in the KwaZulu-Natal Midlands. 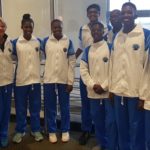 Team SA excel in the pool at Zone 3

By GARY LEMKE in Tokyo On the third day of staying in the Paralympic village bubble “it” finally dawned on me. “It” wasn’t the sheer visual aspect of the 4 000-plus Paralympians with disabilities all in the same environment of towering 17-storey apartments and surrounded by a 4km perimeter fence. Admittedly, that is the initial and most common conclusion of… END_OF_DOCUMENT_TOKEN_TO_BE_REPLACED