South Africa has claimed a total of eight gold, four silver and four bronze medals at the 2013 African Continental Championships, which came to a close after Thursday’s Elite/Under-23 men’s road race, in Sharm El Sheik, Egypt.

The Elite and under-23 men did not finish within the medal count in the road race, which covered a distance of 155 kilometre. South Africa’s highest finisher, HB Kruger (22), finished one minute 43 seconds behind the winning time in 10th place. Ryan Gibbons (19), Herman Fouche (26) and Calvin Beneke (22) finished in the same group as each other, five minutes and 36 seconds off the pace.

The South Africans’ medal haul began with the Team Time Trial stage on Sunday, when the junior men and junior women claimed gold. The Elite/Under-23 men claimed a bronze medal in their race.

The Individual Time Trial stages saw Elite contender Ashleigh Moolman-Pasio, Heidi Dalton (junior) and Ivan venter (junior) claim a total of three gold medals, while juniors Monique Gerber and Morn├® van Niekerk claimed silver medals. On Tuesday, Willie Smit and JC Nel added to the medal tally by claiming two medals each. The under-23 competitors were awarded for their achievement in both the overall race as well as in their u23 category. This resulted in Smit claiming a gold and silver medal, and Nel claiming a silver and a bronze medal.

Whilst the racing provided much entertainment to locals and visitors alike in Egypt, South Africa was also well represented at the off-the-track events.

With 2014 being an Olympic qualification year for our cyclists, the strategic meetings and planning sessions are critical in assisting with the development of cycling in Africa. Pietermaritzburg was recently awarded the rights to host the 2015 CAC Forum.

Mike Bradley, General Manager of Cycling SA, attended the UCI Sharing Platform (USP), also in Sharm El Sheik. The USP is the second of its kind to take place, with the first event in Geneva been hailed as extremely successful. Representatives of the National Federations prepare presentations for discussion covering four broad areas: general management, marketing and sponsorship, events and sports development. 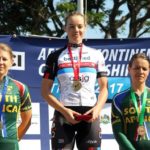 Chavanel back in yellow

By GARY LEMKE in Tokyo On the third day of staying in the Paralympic village bubble “it” finally dawned on me. “It” wasn’t the sheer visual aspect of the 4 000-plus Paralympians with disabilities all in the same environment of towering 17-storey apartments and surrounded by a 4km perimeter fence. Admittedly, that is the initial and most common conclusion of… END_OF_DOCUMENT_TOKEN_TO_BE_REPLACED