South Africa’s national women’s hockey team went down 1-0 to Germany in the quarter-final of the FIH World Hockey League Semi-Finals in Johannesburg on Tuesday.

With just over a minute to go before half-time, Germany broke the deadlock when Camille Nobis scored.

It has to be said that the goal was somewhat against the run of play, with South Africa dominating most of the second chukka.

With two minutes left in the match, Germany hit the back of the goal-box, but after a South African referral the goal was not awarded.

Seconds later South Africa got another penalty corner but, like the various other opportunities earlier in the final chukka, the ball missed the target.

Unlike the game against the US, the SA attack wasn’t as sharp and German defenders managed to keep the ball out of the goal-box.

Germany are currently seventh on the world rankings and SA 13th.

The first semi-final is between the USA and England and the second between Argentina and Germany. 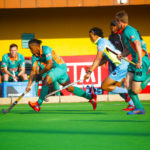 Damons on her wonder goal