The South African boys’ five-a-side hockey side at the Youth Olympic Games are just 36 minutes, or one game, away from a definite medal.

That after a thrilling 3-0 win against New Zealand on Saturday night which sets them up for a semi-final clash with Australia on Monday. Captain Nqobile Ntuli netted all three SA goals.

Coach Neville Rothman is firmly of the belief that the SA boys’ tough pool games have played a big part in them being on the bring of a certain medal by virtue of a final berth.

‘The thing is that we have prepared very well off the field for these games. We learnt a lot from a few very tough games in the pool and I think this has played out to our advantage.

‘We took a lot out of the Spanish game in particular,’ said the Stellenbosch based coach. SA lost that game 6-0 but it it was an invaluable learning curve.

‘It taught us that we have to be defensively sound from the beginning, not concede early and then build on that. In Saturday’s game Matt Martin (‘keeper) had a great game and that all helped build pressure.’

South Africa have already taken on the Hockeyroos in an earlier pool fixture, rising from the ashes of a 5-0 deficit to seal success with a 6-5 victory.

‘So we have proved that we can beat them,’ says Rothman. ‘We just have to make sure that we don’t have a slow start like in that match.

‘But we have earned the right to be here in the semi-final. Now it’s the same old story of a semi-final or knock-out fixture, anything can happen.’

The rest of Team SA here in Nanjing and the rest of the population back home, will be hoping that’s a celebratory happening come Monday night.

Picture of Matt Martins by Wessel Oosthuizen/SASPA. Pictures of Team South Africa’s campaign at the 2014 Youth Olympics are free for downloading on www.sascocimages.co.za. 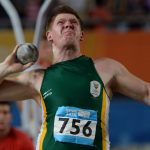