Despite going down 2-0 to Argentina in the fourth hockey Test on Thursday, the South African men’s side put up their best performance of the series to date.

And the national women’s side also stood up to be counted, losing by the odd goal in five to the Argentine women’s side, also on Thursday.

Argentina also had two first-half PCs ÔÇô and three good shots from open play, the third of which was successful when the South Americans were given way too much time to build an attack from the back before freedom from pressure set up Joaquin Menini’s ruthless strike in the 29th minute.

The Argentinians lead 1-0 at the break and went 2-0 up in the 42nd minute when Juan Gilardi sent a 50m aerial pass to the pacy Alan Andino, who showed great control and composure to smash home.

SA had two more PCs in the second half to win the overall PC count 4-2 and were shaded 5-3 in the opportunities from open play after the changeover.

The South African men will draw much heart from their efforts going into the fifth and final match of the series on Friday. Argentina have won all four Tests played to date.

On to the women’s match and a series of fine saves from set-piece and open play by inexperienced goalkeeper Anelle van Deventer kept the Investec-sponsored side in the game during an action-packed game.

The reigning World Cup champs’ win against a fiercely determined SA team gives them a 4-0 series lead, but the player of the day had to be University of North West student Van Deventer, who made more than a dozen top saves in the match.

Eight-time World Player of the Year Luciana Aymar gave the SA defence a torrid time with her mazy runs, while Carla Rebecchi got a brace with a penalty corner goal in the 22nd minute and the winner from open play in the 56th.

An Agustina Albertario strike in the 16th made up Argentina’s set of three goals, but it was the sheer grit of pacy SA runner Bernie Coston who took a quick self-pass before shrugging off heavy challenges to set up Celia Evans’ crisp strike for the opening goal in the fifth minute.

Then followed a 15-minute period of marked Argentine dominance in which Van Deventer repelled ace PC drag-flicker Noel Barrionuevo on numerous occasions, but the pressure eventually told when Albertario equalised in the 16th minute with a powerful strike into the backboard.

Another quality Van Deventer save came after Daniela Sruoga picked up a loose ball but a fifth PC in the 23rd minute saw Rebecchi make no mistake for the 2-1 half-time score.

Evans had a great chance to draw level in the 26th but her shot was well saved by Argentine keeper Laura Aladro.

The girls in green and gold had other chances in the match, and equalised soon after the break (38th) through the hardworking Illse Davids. Rebecchi’s second then sealed things in the 56th minute.

Some dubious PCs were awarded to the Argentines but the fact that they managed to win an impressive 10 in the match, was a mark of their dominance.

That said, Argentina only won by the odd goal in five and underlines how a determined underdog can upset the applecart at World Cups.

Shelley Russell on the charge in Argentina. 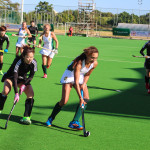 SA go down in seven-goal thriller

Tokyo looms, again, We don’t know for sure in what shape of form the Olympics and Paralympics will take place in July to September and if anything 2020 taught us to take nothing for granted. What we do know is that if Tokyo 2020 +1 does go ahead, it will do so against a new-found back drop where simply taking… END_OF_DOCUMENT_TOKEN_TO_BE_REPLACED