The South Africa men’s hockey team withstood a remarkable challenge from Kenya before running out 2-1 victors in the semi-finals of the Greenfields Africa Hockey Championships on Saturday.
Jon Cook reports that after a goalless first half, Kenya took the lead through George Mutria in the 48th minute. SA equalised through Lloyd Norris-Jones in the 51st minute and Pierre de Voux slotted the winner in the 55th, just five minutes from the end.
In the first semi-final, a clinical Egypt beat Ghana 7-1 but the score didn’t do justice to the Ghanaians, who frittered away a bagful of chances.
The SA and Egypt men’s side will meet at 4.30pm Sunday in the title match.
The women’s competition is played on a round-robin format and does not feature a final. However, Sunday’s 11.30am women’s match between South Africa and Ghana is, in effect, a final.
A victory earns three log points. Ghana, on 13 points, must beat SA (15 points) in order to book a ticket to the Rio 2016 Olympic Games.
The SA/Kenya men’s semi-final was another reminder of how dangerous the underdog can be in a one-off encounter.
The big Kenya strike-force were immediately on the attack down the right and Dylan Swanepoel made a superb tackle to release the pressure.
Soon after, captain Tim Drummond’s men were dealt a serious blow when striker Norris-Jones was forced to exit the stage after taking a fearful blow to the ankle.
Julian Hykes won a hotly-disputed penalty corner in the eighth minute and first wave defender Max Wakhungu ran down Matt-Guise-Brown’s drag-flick before De Voux did the same at the other end.
Kenya’s target men were creating all sorts of problems for the SA defence and a brace of PCs ensued, De Voux blocking one and Kenyan skipper Richard Birir smashing the other just wide of the far post.
In the 12th a pinpoint pass fired from deep by Rhett Halkett saw Wade Paton’s deflection force a save from goalkeeper Linus Kipkemboi.
In between the hockey, players from both sides were being banished to the sin bin as the physicality of the collisions reached a new intensity.
SA had keeper Rassie Pieterse to thank for making three top saves in succession in the second quarter as the skilful Derric Kuloba, George Mutria and Leon Magomere fired goal-shots his way.
Then it was the massive Zakiria Msumba’s exquisite close control that won the on-fire Kenyans another PC but the chance came to nought.
At the other end, SA striker Richard Pautz took a sickening blow to the head and was forced off with blood streaming from the wound.
Norris-Jones, meanwhile, had returned to the fray and in the 24th minute SA came close to breaking the deadlock but Dan Sibbald’s effort from close brought a fine reflex save from keeper Kipkemboi.
SA striker Natius Malgraff did exceptionally well to earn a PC four minutes from half-time but first-wave defender Wakhungu ran down the drag-flick once again.
The skills of Brandon Panther forced a PC award a minute from half-time but Jethro Eustice’s effort flashed past the wrong side of the post.
Just seconds from the interval Miguel da Graca fed De Voux and a defender’s challenge left Spanish umpire Andres Ortiz pointing to the penalty spot without hesitation, but Halkett’s effort went wide.
The teams turned around with the score still 0-0 and three minutes into the second half Guise-Brown fired a great diagonal ball to Daniel Bell whose pass set up Julian Hykes, but the striker shot wide.
Drummond’s skill won a PC in the 40th minute but Wakhungu put his body on the line to run down the drag-flick once again. It came at a cost as the blow forced him to leave the field.
Sin-bin offences continued in this hugely emotional clash and both sides were down to 10 men as the third quarter drew to a close.
With 12 minutes left (48th minute) the sizeable contingent of Kenyan fans erupted when George Mutria made space before slipping the ball past SA keeper Pieterse (1-0).
In the 51st minute Hykes did a superb job under huge pressure to set up Norris-Jones for the equaliser (1-1).
Norris-Jones came agonisingly close a minute later and Kenya suffered a blow soon after when the massive striker Msumba had to hobble off with cramp.
The SA fans exploded with joy five minutes from the end (55th) when De Voux’s snap-shot beat keeper Kipkemboi after Norris-Jones had made the play (2-1).
With a minute left, Paton made a crucial sliding intervention in the six-yard area and SA were through to the final.

In the photo by Marcell Sigg, South Africa’s Lloyd Norris-Jones (10) and Jonty Robinson signal the winning goal by Pierre de Voux (not in picture) as Kenya keeper Linus Kipkemboi reacts. 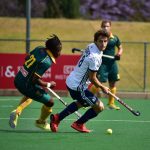 SA Hockey men fight it out to the end

Tokyo looms, again, We don’t know for sure in what shape of form the Olympics and Paralympics will take place in July to September and if anything 2020 taught us to take nothing for granted. What we do know is that if Tokyo 2020 +1 does go ahead, it will do so against a new-found back drop where simply taking… END_OF_DOCUMENT_TOKEN_TO_BE_REPLACED