After the local women dominated proceedings earlier on Friday it was the turn of the oldest three categories of the men’s cross country competition to take to the Cascades MTB Park course in Pietermaritzburg on the opening day of competition of the UCI MTB Masters World Championships.

And it was another successful showing by the South Africans who claimed two of the three World Cup jerseys on offer.

The riders may have been at the furthest end of the age scale but the competition was brutal and in the men’s 55-59 year old category Paul Furbank snuck in ahead of Swede and defending champ Benny Andersson to take the rainbow jersey.

ÔÇ£I was pretty nervous before the start of the event but I am so glad that I came through with the win,ÔÇØ Furbank mentioned. ÔÇ£There was some serious competition out there and I had to be on top of my game in order to win it on such a fantastic course!ÔÇØ

There were a few changes in the lead in the opening stages of the clash with the Swede putting Furbank under a lot of pressure the whole way through the race and a piece of brave decision-making by Furbank required for him to eventually break the shackles and take the decisive lead that he then never relinquished for the rest of the encounter.

ÔÇ£I attacked early but Benny (Andersson) took over quite early and it took an A-line from me to go past him and then I made sure that I stayed in front.

ÔÇ£He was always putting me under pressure and whenever I looked over my shoulder I could see him there which made me go a little faster,ÔÇØ the Johannesburg rider mentioned.

The second World Championship crown for the host nation came after Linus van Onselen claimed the title in the men’s 60-64 category ahead of Venezuelan Pedro Trujillo. The South African was over the moon with his accomplishment.

The difference between training and the actual racing pace was something that had Van Onselen a little apprehensive going into the race but once the adrenalin started flowing it got a lot easier.

ÔÇ£I came into the race a little intimidated after a few days of training on it but when I got into the race and was being chased down by the other riders I was confident that I could do the job.

ÔÇ£It was quite hard with the congestion from the riders in front because when I caught them it took them a bit of time to move over and let me through.

ÔÇ£That was the only issue and the course was great and I really couldn’t have asked for much more,ÔÇØ van Onselen added.

The men’s 65+ category was won by Frenchman Christian Jupillat who, with this win, claimed his thirteenth World Championship title across all cycling disciplines. He pipped British rider Victor Barnett to the rainbow jersey to regain the title he won last year.

ÔÇ£I had such a fun ride out there but it got a little tough with the people in front of me because they were quite a lot faster than me but I stuck to what I know and it worked,ÔÇØ he said.

In a career that has spanned a number of decades Jupillat achieved his fortieth podium in international cycling and that experience was something that helped him through.

Charles Stander, father of the late Burry, ended in fourth place in the men’s 60-64 category and returning back to a course that was a favourite of his son was something that he enjoyed whilst also showed his support of the #iride4burry initiative by sporting his wrist band throughout the race.

ÔÇ£It was a lot fun to ride out there on a course that Burry really enjoyed riding on and being able to ride in a World Championship here made it even more special. ÔÇ£It was a tough race for me and I wasn’t feeling great going into it but I will take fourth,ÔÇØ a satisfied Stander said.

The UCI Mountain Bike and Trials World Championships takes place at Cascades MTB Park in Pietermaritzburg from 26 August to 1 September. 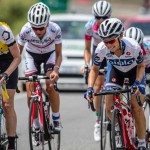 It’s another gold on the road for Moolman Pasio

By GARY LEMKE in Tokyo On the third day of staying in the Paralympic village bubble “it” finally dawned on me. “It” wasn’t the sheer visual aspect of the 4 000-plus Paralympians with disabilities all in the same environment of towering 17-storey apartments and surrounded by a 4km perimeter fence. Admittedly, that is the initial and most common conclusion of… END_OF_DOCUMENT_TOKEN_TO_BE_REPLACED