South African Paralympian wheelchair tennis aces Kgothatso Montjane and Lucas Sithole will return to London in December to join the elite field of the world’s best players at the Olympic Park for the end-of-year singles championship.
The ITF’s season-ending Championships for the world’s top singles players will be held on 2-6 December. For the second successive year, the prestigious tournament will be staged at Lee Valley Hockey and Tennis Centre in Queen Elizabeth Olympic Park, London, Great Britain.
The top eight men’s and women’s players and the top four quad players at the ranking cut-off date of 5 October qualified for the NEC Wheelchair Tennis Masters.
Montjane, who received the Gauteng Sportswoman of the year with a disability award early this month, won two titles at the Swiss Open and the Belgian Open this year, reached the singles finals of the Airports Company South SA Open, and clinched the doubles event.
The world No8 reached the singles semi-finals of the Melbourne Open, where she won the doubles, and she also won the singles and doubles events at the Queensland Open, in January.
The country’s top quads player Lucas Sithole, ranked No3 globally, finished runner-up to seven-time champion David Wagner in the 2013 event. Sithole defeated former world No1 Wagner to win the Airports Company South Africa SA Open at Ellis Park Tennis Stadium early this year and demolished the American again in the semi-final round of the British Open before lifting the title in Nottingham.
Both Montjane and Sithole will also be competing in the Nottingham Indoor tournament, an ITF level 1 event to be staged at Nottingham, Great Britain from 18-22 November, prior to the NEC Masters. 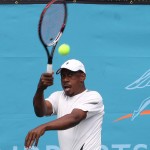 Kevin out at Queen’s

By GARY LEMKE in Tokyo On the third day of staying in the Paralympic village bubble “it” finally dawned on me. “It” wasn’t the sheer visual aspect of the 4 000-plus Paralympians with disabilities all in the same environment of towering 17-storey apartments and surrounded by a 4km perimeter fence. Admittedly, that is the initial and most common conclusion of… END_OF_DOCUMENT_TOKEN_TO_BE_REPLACED