Portugal took full advantage of playing at home against South Africa in Lisbon to record a 4-0 victory in their Davis Cup Euro/Africa Group 1 tie.

Portugal secured the victory over South Africa when their doubles team of Joao Sousa and Gastao Elias upset the fancied South African outfit of Raven Klaasen and Ruan Roelofse 6-4, 6-7 (4), 6-2 on Saturday. The doubles rubber win gave the hosts a 3-0 win over the visitors.

‘It was tough out there,’ admitted Klaasen following their loss. ‘The court certainly was prepared well by the Portuguese to suit their games and with the capacity crowd behind them, it made it tough. But we had our chances and felt we were playing well enough to win the rubber but Joao and Gastao were just too strong.’

Roelofse agreed with Klaasen. ‘The conditions certainly were tough, but we had our chances, it’s just that the Portuguese played the big points better and never let us find our rhythm. It’s never easy losing in the Davis Cup.’

It was the first Davis Cup doubles loss for Roelofse in the 13 rubbers played and the first loss for Klaasen and Roelofse playing as a team.

On Friday, Portugal got off to a flying start when they won both their singles rubbers without dropping a set. Pedro Sousa beat Lloyd Harris 6-1, 6-1 in the opening singles rubber and then Portuguese No 1 Joao Sousa gave his country the crucial second point when he beat Nik Scholtz 6-3, 6-2.

Both team captains agreed to play one reverse singles rubber following the doubles. Marcos Ondruska named debutant junior Philip Henning to do duty for his country who went up against Joao Domingues. Domingues beat Henning 6-4, 6-0 to give Portugal a 4-0 clean sweep victory.

‘It was a tough loss and I am still trying to understand where we went wrong,’ said Ondruska. ‘I felt we played well but Portugal were just too good and played extremely well and used their home-tie advantage to full advantage and credit to them for doing that. On paper, Portugal are the higher ranked team, individually and as a team so it was always going to be a tall order to beat them especially away, but I did feel we had a chance and that the South Africans played well enough to win, the Portuguese were just better this weekend.’ 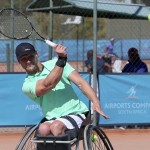 Els does the double with two titles in Bloem

Tokyo looms, again, We don’t know for sure in what shape of form the Olympics and Paralympics will take place in July to September and if anything 2020 taught us to take nothing for granted. What we do know is that if Tokyo 2020 +1 does go ahead, it will do so against a new-found back drop where simply taking… END_OF_DOCUMENT_TOKEN_TO_BE_REPLACED