A six-strong South African side has been named to do duty at this year’s UCI Mountain Bike Marathon World Championships.

Cycling South Africa named four men and two women in the side for Singen, Germany, from 24-25 June.

The riders have all been selected in line with the 2017 CSA-MTB Selection Criteria.

The two women are Robyn de Groot, who recently notched up a fifth national marathon title, and she’s joined by Amy McDougall.

Riders who qualified through the UCI World Marathon Series and intend participating in the Marathon World Champs, are required to send their information to Dellah Paul [email protected] so that the entry can be processed.

Next month’s World Championships will take the Elite Men along a 98-kilometre route, while the Elite Women tackle an 80km route in the Hegau area of Germany, just north of the German/Swiss border.

Climbs will be short, but characteristically steep, as the riders traverse the German countryside in pursuit of the rainbow jersey and the accolade of being dubbed world champion.

Laws and Olympian Moolman Pasio gear up for 94.7 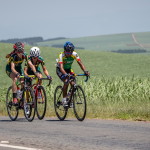 Moolman Pasio takes pride of place with another African gold

By GARY LEMKE in Tokyo On the third day of staying in the Paralympic village bubble “it” finally dawned on me. “It” wasn’t the sheer visual aspect of the 4 000-plus Paralympians with disabilities all in the same environment of towering 17-storey apartments and surrounded by a 4km perimeter fence. Admittedly, that is the initial and most common conclusion of… END_OF_DOCUMENT_TOKEN_TO_BE_REPLACED