The South African men’s and women’s Under-21 hockey teams will play Egypt and Ghana respectively at Randburg Hockey Stadium Saturday in the finals of the Africa Qualifier tournament for the 2013 Junior World Cup.

Jon Cook reports that with their places in the finals already booked after victories on Wednesday, the SA men and women used the last round of league matches Friday as useful workouts ahead of Saturday’s title matches (men 4.30pm and women 2pm)

The SA men beat Kenya 4-0 after the score was 2-0 at the break, the goals coming from Grant Glutz (a stunning backhand that bulged the net), penalty corner ace Matthew Guise-Brown (2) and Ross Gonsalves.

On Wednesday, the SA men had edged Egypt 1-0 in the most exciting of preliminary round matches that could have gone either way, which makes it impossible to predict the outcome of Saturday’s tournament finale.

The SA women beat wooden spoonists Zimbabwe 9-0 after leading 6-0 at half-time. Lilian du Plessis netted a hat-trick and Jacinta Jubb got a brace, with the rest of the goals going to Demi du Toit, Izelle Lategan, Erin Hunter (a superb strike that raised the roof of the net) and Tanya Britz.

The SA women should have the measure of Ghana in their final, having won the preliminary round match 4-0, but stranger things have happened.

Ghana’s men, needing to beat Egypt Friday to qualify for the gold medal match, came very close before going down 6-5 in a thrilling encounter packed with drama and passion in which eight disciplinary cards were interspersed with some great goals. At 3-2 to Ghana at half-time, the alarm bells were ringing for the Egyptians.

Kenya’s women needed to beat Ghana by five clear goals to make the final but the Ghanaians were having none of that and ran out 4-0 winners.

Damons does it for SA 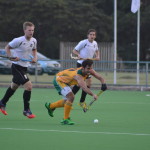 Draw sets up the SA-Austria series for thrilling conclusion

Tokyo looms, again, We don’t know for sure in what shape of form the Olympics and Paralympics will take place in July to September and if anything 2020 taught us to take nothing for granted. What we do know is that if Tokyo 2020 +1 does go ahead, it will do so against a new-found back drop where simply taking… END_OF_DOCUMENT_TOKEN_TO_BE_REPLACED