South Africa’s leading junior water polo players are in Brno, Czech Republic to do duty at the EU Nations tournament over the next four days.

They’ll be one of 12 teams fighting it out for honours, the others being the host nation Czech Republic and other European nations Denmark, England, Finland, Ireland, Latvia, Malta, Scotland, Switzerland, Wales and Austria.

The team left South Africa on Wednesday, heading to Vienna via Doha before taking a train on the final leg to Brno.

Coach for the tour is Luvyuo Rubushe. Formerly from East London, the 2011 matriculant has been in Pretoria since 2012 and is currently Director of Water Polo and first team coach at Pretoria Boys’ High.

‘The boys are very excited and in good spirits. We had two training sessions on Thursday to just shake off the cobwebs from traveling,’ he said.

‘Our first game is Friday when we take on Wales. That’s also the first game of the tournament. Then there’s another game which will be followed by the opening ceremony.

‘After the opening ceremony we play a second game against Lithuania. They’re quite strong, one of the strongest teams here, but we have big faith in ourselves as a unit.’

In terms of preparation, the coach said he would have preferred more time ahead of the Nations tournament. ‘We were a bit rushed for time and I would have loved a training camp but there was just not enough time.’

The boys did however play together in Malta and roughly half the squad also played in Zimbabwe earlier this year at the CANA event, a mini-tournament between Zimbabwe U17 A and B sides and their SA counterparts.

‘I’m very excited to have coach Brad Rowe working with me on this trip as an assistant coach on the first tour. He’s a veteran coach with many, many years of experience at national level and I’m really excited to learn from him and draw from his insight.’

Squad manager is Madoda Mnyena who has already been on two senior international trips with the women’s side and also brings good experience to the team set-up.

Here’s what a few of the team-members had to say ahead of their Czech Republic experience:

Yaseen Margro (pictured above, Westville Boys High, KZN) –  left or right fetch/wing: ‘I’m looking forward to playing against other international teams and seeing what it is like to play in a proper international tournament, I started playing water polo in Grade Eight.

Seth Kriger (Rondebosch Boys, Western Cape) – back sitter/front sitter: ‘I’ve played since Grade Four but only seriously in Grade Seven and want to learn more as a player and a person.’

Kgomotso Mataka (St Stithians, Gauteng) – goal keeper: ‘I started playing polo in 2014 and am looking forward to playing with and against quality players.’ 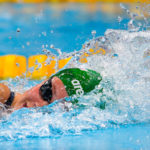