Barry Hendricks was elected as the first vice-president and Cecilia Molokwane as a board member at the annual Sascoc meeting held in Johannesburg. These special elections follow the vacancies created by Hajera Kajee and Les Williams, respectively.

Speaking at the annual meeting, which was attended by 76 federations and provincial sports confederations, Sam gave a review of the 2018-19 financial year.

He highlighted that the last financial year was not easy and the organisation has not been immune to the global economic problems. ‘Though getting funding across the board was tough, we didn’t bury our heads in the sand but rather devised creative ways to keep afloat and delivered our mandate as the macro sports body,’ Sam said.

Sam appreciated all stakeholders who provided funding to the organization. These include the National Lotteries Commission, the Department of Sports and Recreation South Africa, IOC, IPC, CGF and ANOCA. However, budget cuts in Sascoc are affecting the organisation negatively.

Moving to the ministerial inquiry, Sam reiterated that the outcomes are affecting the organisation negatively and Sascoc needs to bring this issue to finality to enable the minister to sign off.

Another adverse consequence of the pending ministerial inquiry is the continuous negative effect on the organisation’s brand reputation.

The Minister of Sport, Arts and Culture, Nathi Mthethwa, addressed the meeting and noted that South Africans acknowledge and look up to Sascoc as the macro sports body.

‘Sascoc has the responsibility to deliver Team South Africa to international multi-coded events and major world events. The expectation is that our athletes must be provided with as many opportunities and requisite support as possible,’ added the minister.

‘The ministerial inquiry into the affairs of Sascoc was a clear indication that unless the recommendations were implemented, the trust that had been broken because of the damning findings, would not be restored and the negative climate was not good for the country’s Olympic athletes.

‘I was therefore left with no alternative but to complete the process started by my two predecessors in respect of the implementation of the corrective measures highlighted in the report,’ the minister informed the delegates.

To that end, a meeting held by the minister and the board of Sascoc recommended an urgent address of the leadership challenges highlighted by the compliance task team report.

The minister added he is aware that some people feel that there have not been any consequences following the report findings – hence his view that it cannot be business as usual within the organisation.

‘The view that there have been no consequences stems from government’s desire not to be seen as heavy-­handed in its intervention but to work around Sascoc structures to resolve the identified problems. This is especially in light of a positive Sascoc-­Ministry February 2019 meeting on a way forward towards the implementation of the recommendations, which was premised on suggestions from both the International Olympic Committee and International Paralympic Committee,’ he said.

The minister indicated that he looked forward to hearing how Sascoc landed itself in this current situation as well as how the organisation intends to rectify these challenges.

He added that without a plausible explanation and self-­evaluation, it would be difficult for him to request his department to commit more funds to the organisation and some sponsors are awaiting direction from the minister on whether or not to commit funds. The minister also expressed his concern on the large number of disputes from sports federations that are now being placed before his office.

He urged all federations to follow their internal protocols as per their constitutions, which make provision for the resolution of disputes. He indicated that the National Sport and Recreation Act 18 of 2007 is clear on how disputes are resolved.

He concluded by advising presidents and senior leaders of sporting organisations to exercise due prudence in managing the financial resources entrusted to them by their organisations and those they lead as they discharge off their various mandates.

‘The department has received indicative allocations for the medium-term expenditure framework with significant cuts in our budget. This, therefore, calls on all of us to be efficient in the management of resources, minimizing wastefulness and optimizing value for money.

‘This means we must be clear in terms of our priorities as a country and focus on our strengths and that which we do best,’ he concluded.

The audited financials were also presented and adopted. Mazars will continue as Sascoc’s external auditors. 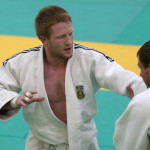 Dale Whitaker’s a winner once more!