Caster Semenya, the Olympic 800m gold medallist, pulled off an extraordinary victory in the women’s 400m at the Brussels’ Diamond League meeting on Friday.

Semenya recorded a personal best of 50.40 for the win that looked completely out of question after the first half of the race.

The South African judged her finish to perfection to see off Courtney Okolo and a threatening pack of Rio finalists led by Jamaica’s Olympic bronze medallist Shericka Jackson.

Semenya’s compatriot, Luvo Manyonga, took the honours in the men’s long jump with a leap of 8.48m.

Ayana, the reigning 5 000m world champion who obliterated the world record when winning gold in the 10 000m in Rio, clocked a meeting record of 14:18.89, the eighth-fastest time ever run over the distance.

She paid the price for a slow opening couple of laps and despite breaking out on her own with 2km to run, the Ethiopian left herself too much to do on the final lap, missing out on the record by seven seconds.

There was also expected to be a tilt at a world record in the men’s 3 000m steeplechase, but in-form Kenyan Conseslus Kipruto fell well short of the 7:53.63 mark set in 2004 in Brussels by Kenyan-born Qatari Saif Saaeed Shaheen. 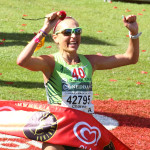 Athletes get another shot

By GARY LEMKE in Tokyo On the third day of staying in the Paralympic village bubble “it” finally dawned on me. “It” wasn’t the sheer visual aspect of the 4 000-plus Paralympians with disabilities all in the same environment of towering 17-storey apartments and surrounded by a 4km perimeter fence. Admittedly, that is the initial and most common conclusion of… END_OF_DOCUMENT_TOKEN_TO_BE_REPLACED