South Africa’s top sprinter Akani Simbine this week got to properly stretch his legs for the first time after the 10-week lockdown when he and his coach worked out on the grass at a golf course in Kempton Park.

The fact that the 100m Commonwealth Games champion was not sprinting so on a synthetic track did not matter. What mattered was that he was outside. He could feel the sun on his back, hear birds tweeting, talk to coach Werner Prinsloo.

Coach and athlete certainly needed to strategise and bond again. The last time they were able to do so was 25 March, the day before the national Covid-19 lockdown started.

According to Prinsloo, they are in a race against time to ensure Simbine is in reasonable shape by September as that is when he plans to start his European campaign.

‘For Akani to be top fit, we need more time. Twelve weeks are not enough. That is why we will not even consider racing earlier.’

The adidas/Tuks sprinter had a brilliant start to his season when in March during the Gauteng North Championships at Tuks he clocked a time of 9.91sec. It was only 0.02sec slower than the South African 100m record he had set in 2016 in Hungary.

At the time Prinsloo confidently predicted that it was not a case of whether Simbine is capable of being faster, but when he will improve on his record. Unfortunately, the Covid-19 pandemic also became a reality in South Africa. It led to all sport coming to an abrupt halt.

Prinsloo admits the past 10 weeks were frustrating. He is, however, not one to dwell on what could have been.

‘It is what it is. At least with level three of the lockdown, we can work together again. It is not a bad thing to be training on grass. We have done so in the past in Kempton Park. I had found Akani to be in better shape when we eventually resumed training on a synthetic track. The most significant benefit of training on grass is that there is less impact on Akani’s joints.’

Prinsloo added as a joke that might consider taking up golf as he can work on his putting while Simbine is sprinting down the fairway. On a more serious note, he said that the focus, for now, is to fine tune Simbine’s technique.

‘We are also focusing on his speed. Luckily it is not a problem as once a sprinter has learned to race at a certain pace it becomes part of their muscle memory. It is about activating the body again.’

Prinsloo said that no final decision has been made as to where and when Simbine will be competing.

‘Everything is so uncertain due to the pandemic. A lot can change in the next few weeks. All will depend on what meetings there are in September. The one thing we want to avoid is spending unnecessary time at airports or to travel.’ 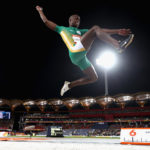 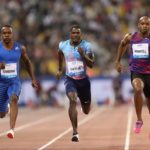 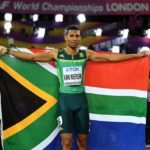