Banyana Banyana have booked their ticket to the 2015 All Africa Games after beating neighbors Botswana 5-0 in Dobsonville on Saturday.
First half goals by veteran striker, Portia Modise and Mamello Makhabane, followed by Amanda Dlamini, Noko Matlou and Silindile Ngubane in the second stanza gave the Sasol sponsored Banyana Banyana a 6-0 win aggregate over the female Zebras of Botswana.
Banyana Banyana started the strongest in the match, winning a penalty as early as the sixth minute after Sanah Mollo was brought down in the box. Mamello Makhabane stepped forward to take the spot kick, putting South Africa in the lead seven minutes into the match.
Modise had a chance in the 10th minute, but her shot went wide-off the goal post with the keeper well-beaten. She made up for her earlier miss when she extended Banyana Banyana’s lead in the 14th minute – receiving a cross from Leandra Smeda on the left flank, and slotting in her 101 goals in national colors.
Mollo was a menace upfront for the Zebras of Botswana, out running them on multiple occasions. Her chance in the 18th minute went across goals while Matlou’s header was cleared-off the line in the 34th minute.
Botswana retaliated immediately after Matlou’s miss, but Roxanne Barker was well alert, coming off his line, parrying the ball out and captain Janine Van Wyk clearing the rebound out of danger.
Nompumelo Nyadeni came close to registering her name on the score sheet, but her effort deemed fruitless with only the keeper left to beat in the 39th minute.
Banyana Banyana went into the half time break leading 2-0.
The visitors returned from the break looking to catch-up as they put Banyana Banyana under pressure in the opening minutes of the second stanza, while South Africa continued from where they left off in the first half.
Dlamini made it 3 – 0 in the 52nd minute after she found herself unmarked inside the box, slotting-in a comfortable goal.
Two minutes later, Modise’s goal was ruled off-side, but Noko Matlou made up in the 59th minute with a brilliant header from a cross in the box taken from a set-piece.
Second half substitution Silindile Ngubane finished-off with a great shot from close range in the 67th minute.
Banyana Banyana continued to push for more goals with Siwe Nogwanya’s shot hitting the cross-bar in the 88th minute.
The 2015 All Africa Games will be held in Brazzaville, Congo from 3-13 September this year.
Banyana Banyana’s next focus is the Rio 2016 Olympic qualifiers which get underway next month. 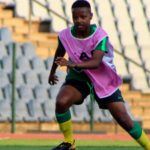 Basetsana’s Mabuza working hard on and off the field

Tokyo looms, again, We don’t know for sure in what shape of form the Olympics and Paralympics will take place in July to September and if anything 2020 taught us to take nothing for granted. What we do know is that if Tokyo 2020 +1 does go ahead, it will do so against a new-found back drop where simply taking… END_OF_DOCUMENT_TOKEN_TO_BE_REPLACED