Hockey of the highest order by the Investec South Africa women’s team saw them beating Belgium in the first Test match at Hartleyvale Hockey Stadium on Sunday.

Jon Cook reports that the world’s 11th ranked side saw goals┬á side’s coming from Kathleen Taylor in the sixth minute, Ilse Davids in the 16th, Sulette Damons (pictured right) in the 17th and 49th, and Celia Evans in the 47th and 61st.

South Africa, who welcomed back defender and Beijing 2008 and London 2012 Olympian Lisa Deetlefs from a leg injury, enjoyed a good start in winning a penalty corner in the fourth minute after Belgium’s Lieselotte van Lindt barged into pacy ball carrier Shelley Russell in the 23-metre area, but Lilian du Plessis didn’t get hold of her drag-flick. A second PC came two minutes later and Du Plessis’ better effort was saved by keeper Aisling D’Hooge but the high rebound fell into the lap of Kathleen Taylor who popped the ball in (1-0).

Wonderful running into space and precision passing then saw the ball go through four SA sticks down the right, but the well-weighted cross went tantalisingly across the goals with a final connection at the key moment the only thing missing.

Another goal had to come and come it did in the 16th minute when Russell took play down the right and passed inside to Illse Davids who first-timed the ball into the back of the net (2-0).

A minute later (17th) SA’s goal of the Hartleyvale Summer Series to date was conjured up when Dirkie Chamberlain, Taylor and Kelly Madsen made the perfect passes at the right time for Sulette Damons to tap in (3-0).

In the 29th and 30th minutes SA carved out two more top-notch opportunities ÔÇô the first the result of an exquisite inside pull and layoff by Nicolene Terblanche ÔÇô┬á but the Belgians survived and the teams went into half-time with SA three goals to the good.

The Belgians came out in determined mood after their team talk and while play swung from end to end, it was the Europeans who won the first PC of the half and the well-worked move left Raes with plenty of time to pick her spot but SA keeper Hanli Hattingh was perfectly poised to nullify the threat.

The enthusiastic home crowd came alight in the 47th minute when Dirkie Chamberlain laid off the pass for Celia Evans to smash home (4-0) and two minutes later (49th) it was the irrepressible Chamberlain who once again who got the pass away for Damons to make no mistake (5-0). Belgium had their moments but Hattingh was equal to the challenge and in the 61st Evans picked her spot for 6-0 and that was that.

Belgian head coach Pascal Kina and his coaching staff will take a long, hard look at the match video and you can be sure the visitors will be more composed and competitive in Tuesday’s 8pm second Test, also at Hartleyvale and ipreceded by a men’s international friendly between a Western Province Invitation team and highly regarded Dutch Hoofdklasse club Amsterdam at 6pm.

The three-Test series against world number four Australia ended Saturday and was drawn 1-1. SA lost the first leg of the Hartleyvale Summer Series, a two-test rubber, 2-0 to world number one and 2013 World League and back-to-back Olympic Games champions The Netherlands last week. 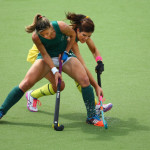